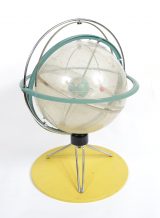 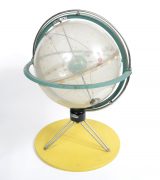 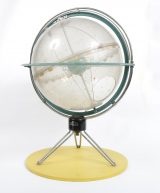 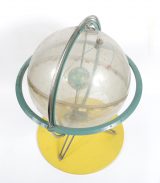 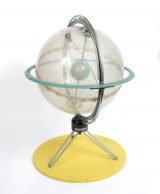 The metal ring and meridian combination supports the outer globe at the south and north poles. The outer globe is formed of two hemispheres of clear plastic, fitted together at the equator. Around the equator there is a band of residue suggesting there was once tape around the circumference. There are rectangles of masking tape stuck on top of this at regular intervals, these are marked with handwritten degree measurements. Molded on the interior surface of the outer globe, there are markings indicating stars and celestial bodies, a dotted area indicating the milky way, and other significant features; major stars of constellations are marked in yellow. Most of these are labelled with Messier numbers (e.g. “M34”). Major constellations are labelled. Areas of the sky are divided up by dotted lines. The ecliptic is marked by a band and a dotted line. In the lower hemisphere of the celestial globe, there is a round hole through which the interior components can be reached.

Good: The base of the globe is an alteration, likely to stablize the globe; it is marked with small dents, pen/pencil marks, and doodles. The metal surface of the legs is marked with some minor corrosion, as is the metal support ring and other metal components. The plastic of the meridian and horizon rings is in good condition, with a few small nicks on the exterior edges. The horizon band is split through near one side of the support ring; glue residue suggests a mend was attempted, however this has now split again.

The celestial globe is dusty and clouded. There is a band of residue around the equator where the two hemispheres were once apparently taped together. The tape affixed over this residue is a modification, possibly making clear markings that were obscured by the tape residue. The round hole originally had a round cover section that could be fitted into it to complete the globe; this is missing.

The interior components appear to be in good condition. However, other models appear to have small pieces of foam affixed to the orbital ring pieces, which this model does not have. It is not clear if these are missing or were never present on this model.