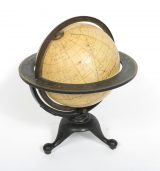 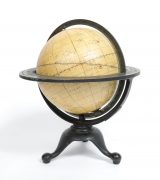 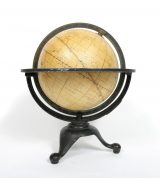 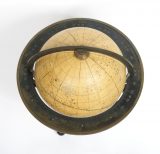 This is is a celestial globe with a full circle meridian and horizon band, standing on a metal stand. The metal stand is painted black and has three feet, each ending in a rounded knob. These feet rise at a curve to meet in a circular metal support. This supports a half-circle metal arc under the bottom hemisphere of the globe that holds up a broad metal ring that runs horizontally around the circumference of the globe (the horizon band) on a flat plane, and a narrower metal ring fitted inside the horizon band that passes through the poles of the globe (the meridian). Both of these are marked with a metal scale, graduated in degrees. The flat horizon band is marked in 360 degrees and “North”, “South”, “East” and “West”, the meridian in four quarters of 90 degrees.

The globe is covered by strips of paper that meet at the poles to cover the whole globe. This is covered with a shiny substance. The surface is yellow, and printed in blank ink with lines depicting the celestial equator, ecliptic and galactic circle, as well as celestial features depicting stars. Some constellations and stars are named.

Printed in a oval shape on the globe: “Duncan’s Eight-Inch
CELESTIAL GLOBE
Showing the positions of the principal Stars and Circles and Reference for the
EPOCH OF 1950.0
By John C. Duncan, Professor of Astronomy
and
Leah B. Allen, Instructor in Astronomy
Wellesley College
Copyright, 1924, by
Rand McNally & Co.”

This globe was designed to teach students about celestial features and to conduct celestial calculations.

The inclination of the globe is adjustable by rotating the meridian. It can be fixed in place by tightening a screw knob at the base of the globe.

The plasticky/enamel coating of the globe is yellowed and mottled with darker patches, particularly around the equator. In places there are patches where the surface has chipped off, exposing lighter-coloured paper. In places, the paper gores forming the cover of the globe are splitting from one another, although they are not raised or peeling.

A comparable instrument, although in a wooden support, can be found at the Collection of Scientific Instruments at Harvard University.

John C. Duncan (1882-1967) was an American Astronomer and after holding a position at Harvard, was Professor of Astronomy at Wellesley College, at Whitin Observatory, from 1916. Biographical information about him can be found in the Complete Dictionary of Scientific Biography.

Leah B. Allen (1884-1973) was an American astronomer. She worked as Carnegie Assistant at Lick Observatory, California, from 1908 and received an MA from Wellesley College in 1912. Presumably, she remained as an instructor there to overlap with John Duncan from 1916. In 1928, she took a teaching position at Hood College, where she remained as Professor until at least 1936.