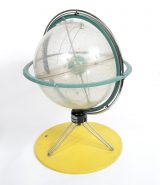 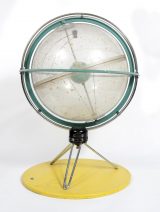 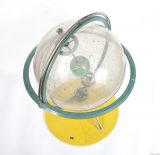 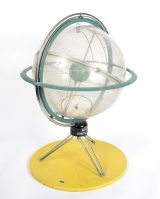 The metal ring and meridian combination supports the outer globe at the south and north poles. The outer globe is formed of two hemispheres of clear plastic, fitted together at the equator. Molded on the interior surface of the outer globe, there are markings indicating stars and celestial bodies, a dotted area indicating the milky way, and other significant features; major stars of constellations are marked in yellow. Most of these are labelled with Messier numbers (e.g. “M34”). Major constellations are labelled. Areas of the sky are divided up by dotted lines. The ecliptic is marked by a band and a dotted line. In the lower hemisphere of the celestial globe, there is a round hole through which the interior components can be reached; this is covered by a circular cover which is held in place by crossing plastic strips. This contains a key for the various symbols on the celestial globe.

On a sticker attached to the base: “3”

Very Good: The base of the globe is an alteration, likely to stablize the globe; it is marked with small dents and a irregular doodle mark made in pen. The metal surface of the legs is in good condition, as is the surface of the support ring; however, the rotated semi-circular ring is somewhat corroded along its length. The plastic of the meridian and horizon rings is in good condition, with a few small nicks on the exterior edges, and some white splodges. The black plastic cylindrical section that connects the legs is cracked in various places, with a portion missing on one side.

The celestial globe is dusty and clouded, but in a good condition.

The interior components appear to be in good condition. However, one of the orbit rings is no longer attached on one side and has fallen. On other models, both other models appear to have small pieces of foam affixed to the orbital ring pieces, which this model does not have. It is not clear if these are missing or were never present on this model.