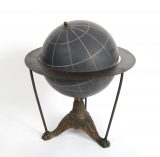 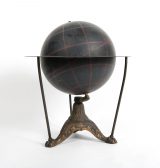 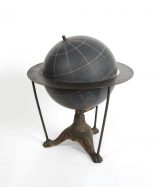 This is a plain black globe with a metal horizon band, on an ornamental metal stand. The stand has three feet modeled to look like paws, with a tapering central pillar molded with ornamental patterns. This pillar is connected to a short arm which supports the globe at its south pole at a slight incline. At the north pole, there is a round metal knob.

Mounted horizontally around the circumference of the broadest part of the globe there is a broad metal ring (a horizon band). This is unmarked. It is supported by three long metal rods rising from the top of each of the three feet of the stand.

The globe is painted a uniform black, with a deep red grid over its surface depicting some longitude and latitude lines, including the equator. The ecliptic is also shown. There are a series of small holes at the intersection of longitude lines with the equator marking.

This globe may have been modified following its original purchase for mathematical demonstrations on a sphere, possibly in an astronomical context. The black surface would have been used for writing on in chalk or pencil.

Good: The metal surface of the stand was enameled or lacquered; in places this appears to have worn off, and the metal is oxidized over much of its surface. The rods supporting the horizon band are also oxidized. The horizon band is oxidized and has some small scratches on its surface, but in good condition.

The black surface may be a later modification; the red lines appear to have been applied by hand. The surface is scratched in places, revealing a plaster layer underneath; this is particularly the case at the top of the globe. There is a pencil marking on one side of the globe in the top hemisphere. There is a narrow crack with some spiderwebbing offshoots about 10cm long running horizontal just underneath the equator marking.