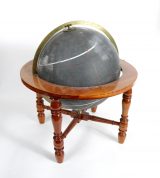 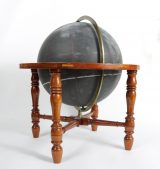 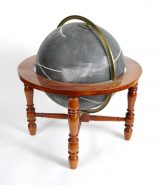 This is a black globe on a wooden four-legged stand. The stand consists of four ornamental varnished wooden legs that support a circular wooden ring that goes around the circumference of the equator of the globe (the horizon band). This band is unmarked. Underneath the globe, the legs are connected by wooden rods that cross directly underneath the globe and support a short vertical metal pillar that in turn holds up the the globe. This also holds a metal ring that runs vertically around the circumference of the globe (the meridian).

This ring is brass, and plain on one side. On the otherside, it is engraved with scale graduated in degrees and marked in tens of degrees in four quarter circles (from ‘0’ to ’90’). The ring sits in metal grooves at the base and on the two sides of the wooden ring around the equator of the globe and can be slide in these grooves so it can be rotated on this access. This ring can be fixed in place by tightening a screw knob underneath the globe.

At the north pole of the globe there is a small metal ring with three curved spokes. This is slightly domed to match the curve of the globe. Around the rim of this ring there is is a scale divided into 24 equal sections. These are labelled in Roman numerals from ‘I’ to ‘XXII’ twice.

The globe itself is painted black, with dark red lines painted over the top indicating certain lines of longitude, latitude and the equator and ecliptic.

This globe may have been modified following its original purchase for mathematical demonstrations on a sphere, possibly in an astronomical context. The black surface would have been used for writing on in chalk or pencil.

The metal components of the globe are in good condition, with some oxidation where the enamel/lacquer coating is thin on the meridian ring.

The surface of the globe is likely a modification of an original terrestrial or celestial globe. This is in very good condition, with a few minor scratches across the equator, and a small dent in the lower hemisphere of the globe. This reveals the plaster underneath.