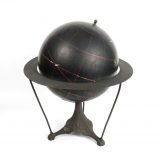 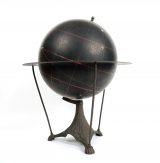 This is a plain black globe with a metal horizon band, on an ornamental metal stand. The stand has three feet modeled to look like paws, with a tapering central pillar molded with foliage patterns and lines. This pillar is connected to a short arm which supports the globe at its south pole at a slight incline. At the north pole, there is a metal knob.

Mounted horizontally around the circumference of the broadest part of the globe there is a broad metal ring (a horizon band). This is unmarked. It is supported by three long metal rods rising from the top of each of the three feet of the stand.

The globe is painted a uniform black, with a deep red grid over its surface depicting some longitude and latitude lines, including the equator. The ecliptic is also shown.

Written in grey/silver lettering on the base: “G13”

This globe may have been modified following its original purchase for mathematical demonstrations on a sphere, possibly in an astronomical context.

The surface of the globe appears to be a modification of the original, and is very likely hand-painted. The paint and surface of the globe is chipped in places, particularly around the equator, where a white (plaster) surface is visible along that line, and in other areas where the surface 0.5mm of the globe appears to have been chipped off; this seems to have largely occurred along red line marks, which may indicate underlying paper gore breaks. There is a significant dent at the intersection of two lines. Otherwise, the globe is dirty but shows little sign of use. In one place there is a neon orange stuck to the surface.