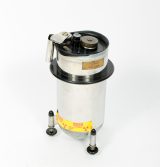 2015.ph.641.1: A cylindrical, metallic, reflective instrument stands on three legs that can be adjusted for height. The body has a metal manufacturer’s label. A black, plastic rim covers the top and upper edges of the instrument. The top of the object has several components including a dial labelled from 0-9, a viewing port, two bubble levels, and a metal holder for two AA batteries that is suspended from the top of the instrument.

2015.ph.641.2: A cylindrical metal case. The case is painted beige/ white and has a metal lid with a handle. The interior of the case is lined with fabric resembling denim that likely covers a foam padding.

One side of the gravimeter is stamped with a square manufacturer’s stamp (Width 6 cm, Height 2.5 cm) with the following details: “WORDEN GRAVITY METER; No. 165; HOUSTON TECHNICAL LABORATORY; Houston, Texas; Made in U.S.A.; patent pending”

The opposite side of the gravimeter has a paper label (Width 5 cm, Height 2 cm) taped onto the metal surface with the following typewritten details: “K: .I0975; MLGS./ DIV”

Gravimeters are used to produce extremely precise measurements of the local gravitational field of the Earth.

641.1: This object has some minimal damage and noticeable signs of wear. The lip of the plastic top of the gravimeter that just out over the metal body has curled up and away from the body and is rather warped in places. The level embedded in the top of the gravimeter is still functional.

641.2: The case is significantly chipped and battered, especially the lid. The metal latches to hold the lid on are broken. The padding inside the case is granular. The inside of the case has a peculiar odour.

This artifact was acquired by the University of Toronto Scientific Instruments Collection on August 25th, 2014 from a storage room in the McLennan Physical Laboratory building.

This object was described by Gordon West in an interview (audio recorded) on Jan 6th, 2015, along with other geophysical objects and a similar Worden gravimeter (2015.ph.686).

Gravimeters have traditionally been used in the application of gravimetry to the exploration and discovery of oil and minerals throughout the world both historically and presently. They have been alternatively referred to as gravity meters historically.

Houston Technical Laboratory, the company that produced this gravimeter, was founded by Sam Worden and Boyd Cornelison in 1945 in Houston, Texas. The Laboratory was then acquired by Texas Instruments in November 1953 which allowed the latter company to rapidly expand its capabilities for electronic manufacturing.