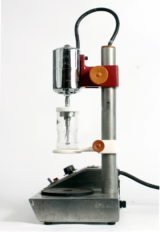 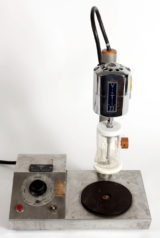 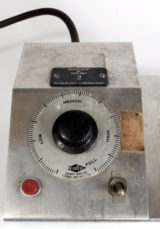 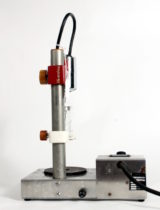 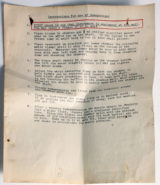 This device would have be used to pulverize or liquidate tissue samples.
The stainless steel base features a dial to control the blade and blending mechanism. It goes from ‘low’ to ‘full’ speeds. Below the dial, to the left, is a red plastic nob that protrudes. It is not a button, and would possibly light up when the device was in use. To the right of this nob is an ‘on-off’ switch. It currently sits in the ‘off’ position.
To the right of the controls is a base from which a pole emerges vertically. This pole supports two adjustable arms. The lower arm is white in colour, and the instructions which accompany the device call it a “centering clamp”. This centering clamp would ensure that the blade remained centred and in position. It can be adjusted vertically.
Also attached to the pole is a red arm that supports the motor and blade components. It is also adjustable vertically.The front of the motor has a blue plaque which reads, in metallic letters, “VIRTIS “23””.

2016.zoo.1.2 Paper Instructions:
The device is accompanied by a set of instructions on paper.

Above the dial is a plaque that reads “Department of Zoology, 2, Physiology Laboratory”. This plaque was most likely added when the device was acquired by the Department of Zoology. Next to the dial is a piece of fabric tape which reads: “Do not exceed this RPM”, with an arrow pointing to the dial’s “high” marker. On the dial is a logo that reads: “VirTis Research Equipment Gardiner New York (illegible)525”. Manufacturer’s plaque reads: Serial no. 23-1041, Model no. 6-105AF, Volts 115, Cycles 60, Amperes 2, Phase 1. On the base: 810521. Knob on the back of the device reads “Fuse”. PHYSIOLOGY is etched into the back of the red arm that supports the blender’s motor.

This object was used to liquidate tissue or muscle samples. A glass reservoir (missing), resting on the device, would have been filled with ice to keep the tissue sample very cold. The smaller chamber, with the homogenizer blade and the tissue sample, would then have been lowered into the reservoir.

The object is in fair condition but is dusty and has some water marks on it. Some of the screws are also rusty. Some paint has chipped off from the centering clamp arm.
Based on illustrations from period advertisements the device is missing a part. This would have been a wide glass cylinder 11 cm in diameter and it would have rested on the round metal base below the homogenizer blade. The paper instructions accompanying the object refer to it as a “reservoir”.

Date of Manufacture: after 1953

Owned by the University of Toronto’s Department of Zoology. Donated to UTSIC in November 2015. It had most recently been stored in the department’s ‘museum room’.

The VirTis 23 Homogenizer was still being produced in 1963, based on an advertisement for steel reservoir flasks dated to September 1963.