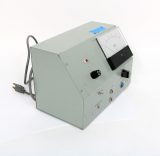 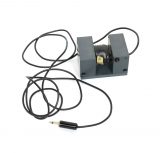 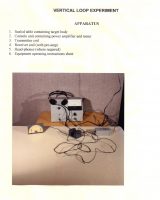 2019.ph.832.1: A console unit housed in a grey metal enclosure. On the angled part of the front face is a square dial reading milliamps. Below this is a vertical face including labelled jacks for headphones, a preamp, a transmitter coil, as well as a power switch, and a dial for adjusting output. A grey electrical cord is attached to the back of the instrument.

2019.ph.832.2: A pair of headphones. These terminate in a large plug that corresponds to the headphone jack on the console.

2019.ph.832.3: A transmitter coil fabricated from grey plastic. The coil is located between two vertical elements and is wrapped in black electrical tape. Attached to the coil is a black wire terminating in a small plug that corresponds to the “transmitter coil” jack on the console.

2019.ph.832.4: A receiver coil and preamp consisting of two elements. The first is a sort of dial with a protractor used to indicate the angle of the coil. This may be adjusted by rotating a plastic indicator. This is connected to a small grey enclosure (preamplifier box) with a green wire. The preamplifier box has a second cord that terminates in a plug corresponding to the “preamp” jack on the console.

This is a teaching apparatus used to demonstrate the principles involved in electromagnetic prospecting. This used to find conductive rocks. The surveying vertical loop method represented by this apparatus was used roughly from the 1950s through to the 1970s, after which it was superseded by the horizontal look method.

Very Good: This instrument appears to be in working condition with no obvious damage. It is a complete set of experimental equipment (excluding the “sealed table containing target body”) but has been made up of two separate sets of the same apparatus.

This artifact was gathered from room 0007A in the McLennan building on March 21st, 2019.

This teaching instrument was designed by Professor Gordon West and used as part of the teaching lab run by the applied geophysics group at the University of Toronto Department of Physics. The lab was in operation based on tabletop experiments from roughly 1970 through 1990.

This instrument is documented in printed material collected from the Department of Physics. This includes an image of the apparatus that is included with this entry.

The University of Toronto Department of Physics was a leading centre for developing and disseminating the technology of electronic surveying. Tabletop experiments such as these were a critical feature of teaching in this area.

Field instruments are often too sensitive, or otherwise impractical, to operate in the midst of a large city.

The vertical loop method was an early method of electronic surveying. The equipment was relatively easy to operate, especially at low temperatures.