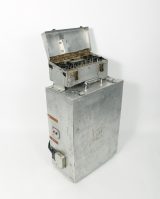 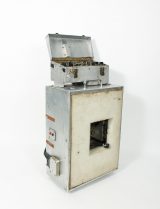 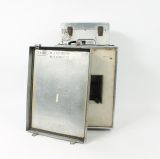 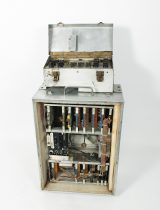 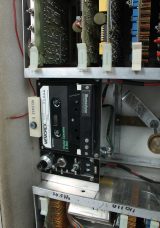 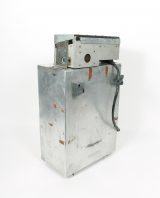 Behind the front cover of the larger enclosure is a foam barrier with a square opening at its centre. This barrier can be removed. Various electronic components are visible through this opening. A tape recording system is visible among other electronic components. An audiotape is still mounted in this system.

Under the top cover of the upper enclosure is a console with a series of buttons, switches, and dials. A square dial is located at the centre of this console.

The UTEM II receiver was part of an early version of a ground-based apparatus used to prospect for economic minerals using transient electromagnetic (TEM) technology.

TEM creates and detects induced fields in conductive minerals. This instrument was part of the mobile receiver system.

Good: The outer case is worn and scuffed, with old adhesive visible in various places. The plastic foam within the front encloser is dirty. One segment of the foam barrier is missing.

This instrument was built at the University of Toronto Department of Physics. It was acquired by Lamontagne Geophysics Ltd. (formerly in Toronto, now in Kingston, Ontario).

This is the second UTEM prototype receiver built at the University of Toronto geophysics laboratory. The first prototype (UTEM 1) was built for my Ph. D. research project. It may still be at U. of T. or it may have been scavenged for building other prototypes. The UTEM 1 receiver was mostly analogue using synchronous rectifier diode bridge switches for channel sampling and LSTTL logic for timing circuitry.

The UTEM II receiver was built as part of the Wideband Time-Domain EM Project (WBTD) at U of T, which was supported by a consortium of mining companies. This receiver introduced digital recording on a cassette tape recorder. It used hard-wired digital circuitry for timing stacking and a dividing DAC for live monitoring of the averaged stacked data. Channel timing was controlled by a time base clocked by an oversized crystal oscillator.
”

UTEM is a ground-based (as opposed to aircraft based) transient electromagnetic system (TEM). Electromagnetic prospecting technologies emerged after the Second World War in Canada and Scandinavia, where generally resistive environments made them practicable.

TEM systems were an evolution of the earlier electromagnetic prospecting systems that took advantages of advances in electronics in order to apply the technology to more challenging environments while producing more interpretable data. The purpose of the UTEM project at the University of Toronto was to “measure directly the magnetic and electric fields induced by a fixed transmitter system in the ground over a relatively wide band of frequencies.” [Lamontagne 1975, 5]

The UTEM system uses a generator-driven transmitter coil to induce a secondary (transient) field in conductive minerals. These transients are detected and recorded using a mobile receiver coil and meter.

The UTEM system was developed by Dr. Yves Lamontagne and his graduate supervisor, Professor Gordon F. West, at the Geophysics Laboratory of the University of Toronto. The system was meant to be readily adaptable to commercial surveys. Dr. Lamontagne completed his thesis in 1975. In 1979, he established the Lamontagne Geophysics in Toronto, Ontario. In 1990, the company moved to Kingston, Ontario.

The UTEM system has gone through several generations. It has assisted in the discovery and investigation of mineral deposits around the world, including an important deposit in the Sudbury nickel area.