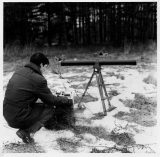 A long (~118cm) rod-like object, made primarily of black and grey plastic, with copper elements along its length.

The UTEM I receiver coil was part of a ground-based prototype apparatus used to prospect for economic minerals using transient electromagnetic (TEM) technology.

TEM creates and detects induced fields in conductive minerals. The coil was part of the mobile receiver system.

This prototype coil is damaged and corroded. It is missing its outer housing and is currently housed in a cardboard shipping tube.

This instrument was built at the University of Toronto Department of Physics. It was acquired by Lamontagne Geophysics Ltd. (formerly in Toronto, now in Kingston, Ontario).

Two prototype coil sensors were used for UTEM research at U. of T. The first one was inherited from an AMT research project (Andrew Koziar/David Redmond). It was made mainly of acrylic plastic and was short-lived. It fell on a rock and broke in the first test UTEM I survey at the Cavendish EM test site.

It was replaced by the more rugged UTEM I coil sensor which was built with multiple sections of windings on a long core and incorporating active guarding to improve the resonant frequency. The gain of the original sensor was subject to gain variations mainly due to temperature changes. There were attempts to add compensation circuitry with thermistors to correct this variation to first order. The sensor is corroded as it was dropped in streams and beaver dams on a few occasions. It was also dropped down a cliff once and flew apart which may be how the outer tube was lost.
”

UTEM is a ground-based (as opposed to aircraft based) transient electromagnetic system (TEM). Electromagnetic prospecting technologies emerged after the Second World War in Canada and Scandinavia, where generally resistive environments made them practicable.

TEM systems were an evolution of the earlier electromagnetic prospecting systems that took advantages of advances in electronics in order to apply the technology to more challenging environments while producing more interpretable data. The purpose of the UTEM project at the University of Toronto was to “measure directly the magnetic and electric fields induced by a fixed transmitter system in the ground over a relatively wide band of frequencies.” [Lamontagne 1975, 5]

The UTEM system uses a generator-driven transmitter coil to induce a secondary (transient) field in conductive minerals. These transients are detected and recorded using a mobile receiver coil and meter.

The UTEM system was developed by Dr. Yves Lamontagne and his graduate supervisor, Professor Gordon F. West, at the Geophysics Laboratory of the University of Toronto. The system was meant to be readily adaptable to commercial surveys. Dr. Lamontagne completed his thesis in 1975. In 1979, he established the Lamontagne Geophysics in Toronto, Ontario. In 1990, the company moved to Kingston, Ontario.

The UTEM system has gone through several generations. It has assisted in the discovery and investigation of mineral deposits around the world, including an important deposit in the Sudbury nickel area.