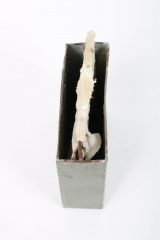 This object is a crudely made metal box taller than it is wide with an open top. The box is painted khaki green. One side of the box is higher than the others, and cut with a round hole, as if the object could be attached to a vertical surface, such as a wall. Dangling inside the box from a horizontal metal rod there is a piece of beige fabric that has been roughly sewn onto the rod. This dangles down the centre of the box right to the base. On the fabric and inside the box there is a quantity of residue from a dried substance. This also seems to have contributed to corrosion around the edges of the box. The fabric is torn at the edges, and has holes worn in it.

Poor: The box is dirty across the surface, with the paint worn away across the base of the front. On the back edge at the top of there is a dent, around which the paint has flaked off on the back and front sides. There is little wear around the hole cut in the back side, suggesting the box was never hung on a wall.

Around the top rim of the container, the metal is corroded; the rod across the open top of the box is also badly corroded, as is the interior of the box. A significant amount of dried residue remains inside the box.

This object was moved from the David Dunlap Observatory in Richmond Hill in 2009, upon the sale of the observatory. They were stored at the Department of Astronomy and Astrophysics until 2017, when it was moved to a new storage location in McLennan Physical Laboratories.