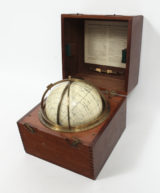 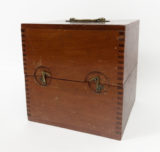 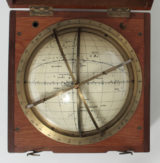 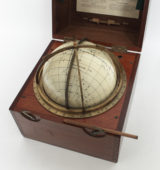 This instrument consists of a small globe contained in a wooden box.

The wooden box is roughly cubic, with a brass-coloured metal hand on the top and two latches on the side two hold the box closed. On the interior of the lid there are instructions for use of the globe and slid onto a metal rod, four sliding pieces with indicator arrows that can be used to indicate points on the globe.

The globe sits in the lower half of the box with a wooden surround so that only the one hemisphere of the globe is visible. It is held in place by a circular metal ring which attaches to the poles of the globe via small metal peg that is inserted into a small hole at the ‘north pole’ of the globe. There is a matching piece affixing the the ring to the south pole. The globe rests sideways in the box; this allows it to rotate freely around its polar axis.

Around the equator of the globe, affixed to the wood, there is a metal ring with a scale etched on it, in degrees of a circle. Fitted over the globe there are two half-circle rings that are fitted together at right angles at the top with a a small metal ball and attached at the base by a ring, creating a hemispherical frame; these also have scales in degrees engraved on them. This fits over the globe and can be freely lifted off and moved.

The globe itself is heavy, likely made of solid wood, and the surface is cream in colour. The map is printed on varnished paper, and indicates important and prominent stars and constellations. There are two small holes with a metal lined edge in the wooden surround next to the globe. One of these contains a red marking pencil.

Printed on a paper label stuck to the interior of the lid: “INSTRUCTIONS FOR USE OF STAR GLOBE”

This star globe is for navigation by the stars, particularly at sea. It helps determine altitude and azimuth of heavenly bodies; identify unknown stars; determine times of rising and setting and angles to stars. Information in the Department of Astronomy & Astrophysics Records reads: “Celestial globes have been used for astronomy education since the 15h century, if not before. This specialized example, invented by Lieutenant English of the Royal Navy, was designed and marketed specifically to solve problems in marine navigation—and indeed was intended for shipboard use. Like the spherical blackboard, this celestial globe could be used to solve problems in spherical trigonometry. It could be drawn on with wax pencils, red and blue being the preferred colours.”

Excellent: The wooden box is scratched and chipped in places and the brass on the exterior handle and latches is dulled. The interior brass components are in slightly better condition. The label stuck on the interior of the box is browned.

The paper of the globe is very slightly yellowed. The interior brass components are tarnished in places, where the enamel covering has been worn away.