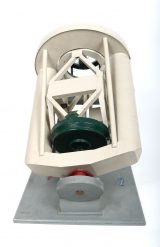 This is a model of the 200″ Hale Reflector Telescope at the Mount Palomar Observatory in San Diego Country, California. It sits on a rectangular plywood base, painted grey, with grey supports at the narrower ends. One of these supports is lower, and supports the base of the telescope model. The other consists of two taller stands with a bar connecting the two; this holds the top of the telescope.

On stickers affixed to the base of the mode: “200-IN REFLECTOR MOUNT PALOMAR OBSERVATORY.”
“University of Toronto – ASTRONOMY – David Dunlop Observatory.”

This telescope was built at the David Dunlap Observatory as part of a set of educational models of large telescopes, designed to show how different telescopes could be adjusted and used.

The Workshop at the David Dunlap Observatory, Richmond Hill

This model, with three others, was constructed at the David Dunlap Observatory in Richmond Hill in or just before 1953. It was kept there until the University of Toronto sold the Observatory in 2009, at which point it was moved to the Department of Astronomy & Astrophysics U of T’s St George Campus along with other objects from the Observatory. In 2017, the model was moved to another storage location in the McLennan Physics Building.

Description of The 200-inch (5.1-meter) Hale Telescope from the Palomar University.