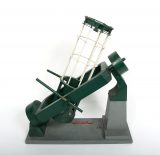 The object is a model of the Hooker 100-inch Telescope from the Mount Wilson Observatory in Los Angeles, California. The model is composed of a grey rectangular wooden base, two green and grey wooden vertical supports at either end of the base, and the body of the telescope, which consists of a green rectangular frame and a hollow cylindrical apparatus constructed from green and grey wood, and green and white metal.

The rectangular frame is held by the two vertical supports. The frame can be rotated to mimic how the real telescope would move horizontally to view different parts of the sky. The sides of the frame are attached to the base of the long cylindrical apparatus, which represents the part of the telescope that would house the lens. The cylinder is constructed of a series of long white metal rods held in place by white and green metal circles. The frame and cylinder are attached at the cylinder’s base by a nut and bolt on both sides of the frame. Each bolt also attaches to a long green metal rod on the outside of the wooden frame. Threaded through a small box and held in place by two screws, the rod can be moved – moving the cylinder with it – to mimic how the real telescope would be moved up and down in order to examine different portions of the sky. When the screws are tightened, the rods and the cylinder are held in place.

There are three thin, rectangular pieces of red metal adhered together to the top of the model’s base, near the center. On the metal, embossed white text reads, “.100-IN. REFLECTOR. MOUNT WILSON OBSERVATORY. CALIFORNIA.”

On the under side of the base, a note written in black permanent marker reads, “property dept. of astronomy university of Toronto”.

At the base of the taller vertical support, on the side that faces the farthest away from the telescope’s cylindrical apparatus, there is a blue metal plaque, on which embossed white text reads, “UNIVERSITY OF TORONTO ASTRONOMY DAVID DUNLAP OBSERVATORY”.

The model was used for teaching purposes and conceptualizing instrumentation by the faculty and students in the Department of Astronomy and Astrophysics at the University of Toronto.

Good. There is a thin crack along three of the four sides of the base of the taller vertical support, which suggests that the model should not be handled from this area. There is a significant amount of dust on the surface of the model, particularly in joints and cracks. There are several, small areas of wear and tear throughout the model, including abrasion to the paint and wood at the back of the taller vertical support; chips in the paint and wood in places where the moveable cylinder has rested or been dropped on, such as at the front and back of the rectangular frame; small spots of rust on the circular metal pieces of the cylinder; and substantial wear resulting in loss of paint and tarnishing on the green, metal rods.

The Workshop at the David Dunlap Observatory, Richmond Hill

This model, with three others, was constructed at the David Dunlap Observatory in Richmond Hill in or just before 1953. It was kept there until the University of Toronto sold the Observatory in 2009, at which point it was moved to the Department of Astronomy & Astrophysics U of T’s St George Campus along with other objects from the Observatory. In 2017, the model was moved to another storage location in the McLennan Physics Building.