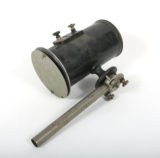 This is a hollow metal cylinder with a rod attached to its side via a socket joint. The cylinder is closed at one end, with a protruding piece that is covered with a small circular rotating cover that slides off to reveal a small hole. The cover has a glass window in the centre that aligns with this hole. At the other end, the cylinder is open, but covered with a circular cover that rotates from a side point. When this is opened, it reveals the interior of the chamber, which has a concave reflective gold-coloured metal piece at the closed end. Half way through the cylinder a metal arm that support a small cylindrical piece in the centre of the chamber.

Also connected to the outside of the cylindrical chamber there is a larger protrusion which holds in place a simple socket which holds a ball connected to a thick metal rod. Three knobs on a ring around the top of the socket can be tightened in order to hold the socket in a fixed position.

On white paint on the rim of the edge of the cylinder: “T.F.”

Pyrometers measure thermal radiation off a source. The Fery Thermo-Couple Pyrometer is a Mirror-type pyrometer, and functions by radiation entering the openable end of the cylinder, reflecting off the mirror at the base and onto a thermocouple suspended by the arm in the centre of the cylinder. The interior rack and pinion gear is used to focus the image of the source being measured; this is viewed through the small window at the closed end of the cylinder. (Burgess, George K., Foote, Paul D. Characteristics of Radiation Pyrometers. Bulletin of the Bureau of Standards, Vol. 12. pg 110)

Very Good: The exterior of the cylinder is marked in some places with corrosion where a black enamel coating has worn away. The base and ball/socket joint and rod are scratched, but not corroded. The glass and interior sections of the chamber are in very good condition, with few marks or corrosion.

This instrument was used at the Department of Physics at the University of Toronto. The “T.F.” indicates it was at least at one point used in the “Top Floor” undergraduate labs under the purview of Professor John Satterly in the 1907-1967 physics building (McLennan Physical Laboratories 1935-1967).

A pyrometer matching this description was patented in 1905 by Charles Féry under the number US842314A.