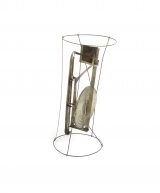 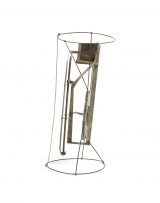 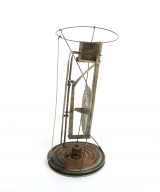 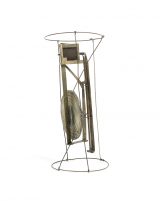 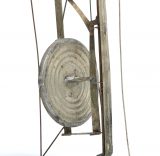 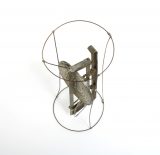 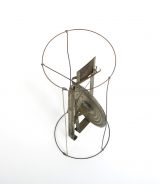 This instrument consists of an exterior frame, an interior mechanism, and a base.

The interior mechanism consists of a metal disk formed of ridged plates of metal that create a flat, but hollow, cylindrical disk. This is mounted vertically inside the wire frame. It is connected to additional parts of the mechanism by a strip of metal which turn attaches to a metal bar which goes vertically and then horizontally upwards towards a small plate. This arm ends in a small metal point that points towards the plate, a pen.

A second bar, also with a pointed pen is held horizontally near the plate. This is attached to a thin metal rod that also runs vertically through the instrument. The end of the horizontal section of this bar is cut with a notch that rests on top of a strip of metal that runs parallel with the bar the length of the instrument.

The outer frame and the interior mechanism attached to the frame sit atop a circular metal base (possibly copper). This is formed of two hollow disks of metal made of pairs of ridged circular plates, similar to the one in the centre of the mechanism. These are connected together at the centre, with a small gap between them. Rising from the centre of them is a cylindrical connection point with a screw adjustment.

This instrument is a meteorological tool which was attached to weather balloons in order to record temperature, air pressure, and humidity of the upper atmosphere.

Good: All joints seem to be firmly attached and instrument remains sturdy in construction. However, there are signs of copper corrosion on the instrument’s base, particularly near the raised cylindrical clamp on the anterior face of the base where a large greenish-white spot has formed. There are also speckles of rust which have spread over most of the instrument’s frame and interior mechanism, resulting in black and dark brownish-red discolouration on most of the instrument’s metallic surfaces.

The copper base disks are not connected to the wire frame and may not necessarily be related as they are not depicted in the diagrams.

This instrument was donated to UTSIC by University of Toronto Physics Department, May 27, 2013.

This instrument was invented and likely owned by William Henry Dines during the early 20th century, however further research is required to confirm this instrument’s provenance prior to its acquisition by UTSIC from the University of Toronto’s Physics Department in 2013.