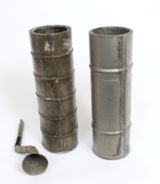 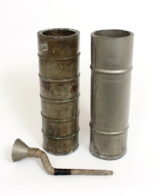 The flask is upright, hollow, cylindrically shaped and made of Brass, which is oxidizing in some places. The exterior of the flask has five, evenly spaced, low-protruding ridges. The bottom of the flask appears to be made out of a different metal as there are traces of rust on the bottom (brass does not rust). The bottom of this flask is flat.
Within the flask, there is a removable funnel that is likely made of Aluminum, and has an intentional bend in its shaft. The shaft of the funnel is wrapped in an unknown, synthetic (?) fabric which appears brown and dirty, with a fraying bottom edge. Just below the curve in the funnel shaft, the fabric is wrapped in a 4 cm length of electrical tape which has a brown, oily residue on it that smells strongly of motor oil.

The instrument is a Nitrogen Dewar, used in the early years of low temperature physics. The flask is upright, hollow, cylindrically shaped and made of Aluminum. The exterior of the flask has two, evenly spaced protruding ridges. The bottom of this flask is concave. There is no removable funnel included with this flask.

There are no maker’s marks on either flask, and they are known to be “homemade” by the University of Toronto Department of Physics. There is what appears to be a brushstroke of white paint on the exterior of the brass flask (.01); however, it is unclear whether this was an intentionally made marking.

The instruments are Nitrogen Dewars used in the early years of low temperature physics. The flasks are insulating devices designed to greatly increase the amount of time that the flask’s contents (in this case, liquid Nitrogen) can remain cooler than the flask’s surroundings.

The flasks were used as “cold traps” which were standard apparatus in high vacuum pumping systems. These “cold traps” were used to trap other gases by freezing them out of a container inserted into the liquid Nitrogen. The liquid Nitrogen then solidifies or liquefies any gas with a boiling point greater than that of liquid nitrogen (77 degrees Kelvin or -196.15 degrees Celsius).

The precise function of the funnel and its relation to the flasks is unknown.

The flask has dents of various sizes covering its surface. There are signs of oxidation throughout and it has a white, powder like residue on the top rim.

The funnel is in good condition, and appears structurally stable. The fabric wrapped around the shaft is stained and fraying on the bottom edge. The electrical tape on the shaft of the funnel is covered in a sticky substance that smells of motor oil.

There are dents on the outside of the flask as well as signs of wear on the finish of the metal. There is also visible corrosion along the welded seam of the cylinder.

The flasks and funnel were given to UTSIC by Dr. Stephen Morris, who was given them by Dr. Allan Griffin (deceased), both professors at U of T in the physics department. Before that, they were given to Dr. Griffin by a man named Archie Hallack.