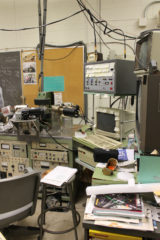 This is a large control console from the laser-heated rare gas mass spectrometer. It is composed of two primary units.

The larger, lower unit is a large rectangular grey metal box. The grey-painted metal box frames the front surface which is composed mainly of plastic buttons and lights mounted on aluminum backing plates. Twenty-two smaller yellow stick notes, marked with pen, are attached to the upper part of the front of the console. One larger stick note indicates the location of the switch activating the sorption pump.

The back surface of this lower box contains a variety of connector ports, all of which are labelled.

A smaller upper box consists of a white coloured metal case with a single name plate and a single red LED indicator. The back of this box is connected to the back of the lower box with three integral connectors.

Lower console: A silk screened maker’s mark from the University of Toronto Department of Physics machine shop, features an image of the McLennan Physical Laboratories building. It reads “Vacuum Valve and Laser Controller UTLAMP-88.” Beside this mark there is an image of a turkey made with an inked rubber stamp.

Nineteen stick notes, marked with dark pen, provides an internal irradiation number (in this case a “P” followed by two digits), which is, in most cases, followed by a “Cd”, indicating the use of a cadmium liner.

This control console that was used with a Laser-Heated Rare Gas Mass Spectrometer for Argon-Argon (Ar-Ar) dating.

Very Good: Some minor corrosion around bolts and metal plates and a detached label. Otherwise, in very good condition.

This artifact was collected on Friday, July 24th 2015 from the Potassium-Argon dating laboratory that was founded by Professor Derek York (1936-2007).

The console was part of the laser-heated rare gas mass spectrometer, an instrument that York played a key role in developing..

The laboratory was removed shortly after these items were gathered.

An email dated Wednesday 20 December 2017 from Dr. Norman Evensen to Dr. Erich Weidenhammer and Sophie Leblanc contains the following information regarding the post-it notes on the console.:

“…the argon-40/argon-39 dating method requires neutron irradiation of the samples in a reactor before argon analysis. This produces the radioactive isotopes Ar-37 and Ar-39, both of which we measured, along with the naturally occurring Ar-36, Ar-38 and Ar-40, to determine the age and certain correction factors required for the calculation (and also producing, as a by-product, the K/Ca ratio of the material emitting the argon at a given sample temperature). To do the calculation involving the radioactive isotopes, we must know the time interval between irradiation and analysis. Each irradiation of a group of samples is assigned an internal irradiation number, such as P36, which is attached to all samples in that irradiation. At least most of the notes simply record the date of a given irradiation, to be entered in for the analysis. A “Cd” indicates that a sheet of cadmium surrounding the samples was added to the sample container at the reactor before the irradiation (and removed there before shipping back to us; it becomes quite radioactive) to absorb the low-energy “thermal” neutrons and reduce the corrections that need to be applied in the age calculation.”