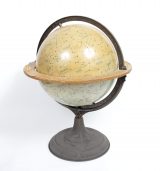 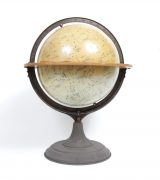 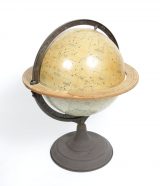 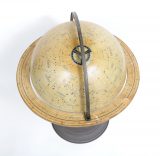 This is a medium-sized celestial globe standing on a round metal base. The base is brown and simply decorated by circular ridges. A central pillar rises from this base, supporting a metal semi-circular ring that in turn supports a ring that runs vertically around the full circle of the globe, connected to it at the top and bottom (the meridian). This is broader on the outside, and marked with a scale graduated in degrees on the interior of both sides of the ring. At the top of the ring, this is labelled “Co-LATITUDE”. This ring can be rotated in the the semi-circular support, enabling the globe’s inclination to be altered.

The globe itself is cream and brown coloured, and formed of segments of paper that are narrower at the top of the bottom so they fit together to form a spherical picture (gores). These are covered by a shiny varnish. The globe depicts celestial objects such as important stars and galacies. These are named. Constellations are outlined with red lines, and named in both Latin and English. Areas of the sky around these are indicated by dotted lines, and the milky way is shown by a darker area formed by red-brown dots. An equator and ecliptic are marked. Some origins for meteor shows are marked, with associated dates.

At the top of the the globe there is a circular metal piece curved to fit the globe’s surface, a portion of which is inset from the rest. This is graduated into 24 portions and marked with the numbers 1 through 12 twice. One side is marked “A.M.” the other “P.M.”

In raised lettering on the support that holds up the exterior semi-circular ring: “MADE IN U.S.A.
D-G CO. CHICAGO”

Good: The metal base of the instrument is in good condition, although marked with dark water stains on one side. The enamel coating on the semi-circular support ring is largely scratched off over the outermost edge. The black paint on the brackets that connect to the horizon band is scratched, and the metal underneath is somewhat rusty.

The surface of the globe is in good condition with only extremely minor marks that affect the printing; however, the red markings on the globe are very faded. The globe is yellowed across its surface/ The plasticky/enamel coating over the globe’s surface is stippled and brown over the upper potion of the globe, particularly on one side. This damage is lesser inside the metal ring at the top, but at its worst on the upper side. There are some water damage marks, particularly diagonally through Canes-Venatici, although also o other potions.