Watch the Transit of Venus Mini-Documentary (approx. 15min) with interviews with the curators, the creation of Transit of Venus exhibition and scenes from the viewing at Varsity Stadium!
http://www.youtube.com/watch?v=nKK99wGY8MQ
Recent additions to the catalogue include an entire new category: Astronomy. This addition results from joint plans between UTSIC and the Department of Astronomy for a series of events to celebrate the transit of Venus that will take place this year. The transit of Venus is a reliable phenomenon, but it only happens in pairs of years every 120 years or so. This year’s transit, June 5, 2012, will be the last such event until 2117. Moreover, the transit of Venus is highly significant for the UTSIC collection, as the Victoria College telescope, featured on the UTSIC symbol, was the instrument used for one of the main observations of the 1882 transit of Venus in Canada. 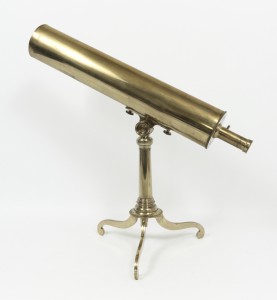 The Gregorian reflecting telescope – similar to those used in the 1761 and 1769 expeditions to view the Transit of Venus.

Thus an exhibit of historical astronomical instruments used at the U of T for the 1882 transit, or related objects (some even dating back to the kinds of instruments used in the 1761 and 1769 transits), seemed inevitable. Although some records of these instruments existed in the previous UTMuSI site, they belonged to the Astronomy Department and we needed to locate them. What ensued was the best kind of collaboration we could hope for with a scientific department.
It should come as no surprise that the Astronomy Department was quite interested in putting on an event for the transit of Venus this year, and very supportive of our interest in cataloguing their old instruments and displaying them. This entailed the now all-to-familiar trip to a cramped room in the basement, where the usual treasure-trove of instruments awaited us. However, as is always the case with UTSIC, admiring shiny brass objects does not translate into neatly categorized, labelled and photographed catalogue entries: some grunt work was required. The vital work of identifying and selecting which instruments would actually go on display was crucially aided by Randall Rosenfeld, the archivist at the Royal Astronomical Society of Canada.
Then, thanks to the templates, instrument handling procedures and cataloguing efforts of a number of the Museum Studies students we have had working for us, we were able to process all the instruments Randall and I had selected. I had direct benefit from these procedures when cataloguing a mystery instrument that seemed designed to screw onto the top of a telescope. After some digging I discovered that this was a filar micro, an instrument used to calculate precise distances between distant stellar objects using fine threads moved by micrometers. Those threads, almost invisible at first, turned out to be composed of spider silk! Fortunately for the instrument, I had not in fact brushed away the apparent cobwebs, a caution gained from the handling training our Museum Studies students had imparted.
Cataloging is not without its frustrations, however, as the precision chronometers were to prove. These chronometers were quite likely the very instruments used to provide the Toronto standard for the 1882 transit. Unfortunately the keys for their casements have somehow been misplaced. At the time of this post various efforts are underway to get into the case, including non-intrusive (non-damaging) lock-picking or procuring skeleton or similar keys from antique clock dealers. If we cannot get into them by the opening of the exhibit (April 28), we may have to display them “as discovered”, a designation that is not without its own historical value.

The exhibit itself will run from April 28 to June 5 (the actual date of the transit). UTSIC and Astronomy are hosting a symposium on April 28 entitled “The Transit of Venus, Past and Present” to highlight the historical and present importance of the transits and also to open the exhibit. This symposium will appeal to those with a serious interest in astronomy and/or the history of science. Speakers include Jay Pasachoff (keynote, Williams College, leading expert on the Sun, planetary transits, and cultural representations of astronomy), James Graham (Director, Dunlap Institute, on the current use of transits in exo-planet research) and Bernard Lightman (York University, on Victorian cultural responses to transits of Venus). The symposium is free, and no registration is required.