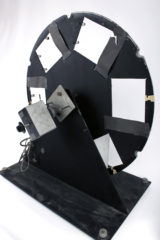 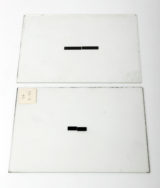 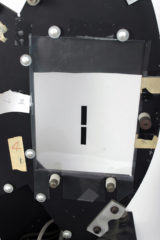 White sticky notes and pieces of yellow masking tape are adhered to the side of the wheel opposite the side that faces the vertical stand. There is one sticky note (or piece of a sticky note) and one piece of masking tape directly adjacent to each rectangular opening, all on the side of the opening closest to the centre of the wheel. The pieces of tape appear to number the slide openings from one to six. The sticky notes are inscribed with letters and numbers corresponding to labels on certain glass slides that accompany the instrument.

An electrical control box is attached to the side of the vertical stand opposite the wheel. The exterior of the box is aluminum with a black panel facing away from the instrument. This panel has a black knob in the centre with the numbers 0 to 100 around it in increments of 10. The electrical box indicates its maker: “CRAMER CONTROLS”. The box also includes the words “TYPE”, “SERIAL”, “POLES”, “MOTOR VOLTS-CY”, “SWITCH”, “SET”, “w.d.” and “RELAY VOLTS-CY”, each with a spot for user inscription based on these categories, but these spots have not been inscribed upon.

The steel rod which attaches the wheel to the vertical stand extends through the wheel to a vertical square metal plate on the side of the wheel opposite the stand. This square metal plate is screwed to a vertical aluminum plate below it, which is attached to and directly above a large white vertical rectangular plastic piece. Where the plastic is attached to the metal by two screws, there is an additional empty screw hole, as well as scratches on the aluminium in a half circle pattern, suggesting that a missing part of the instrument at one time scraped against this spot regularly. The large rectangular plastic piece has a glossy finish, is smooth to the touch, and is partially translucent to light.

At the bottom left of the triangular vertical stand, when facing the instrument from the side opposite the wheel, there is a small lever with a spring that connects to a rod on the opposite side of the base. When this lever is pressed, the rod on the side of the base adjacent to the wheel raises and a small round stopper on the end of the rod moves into a position where it could fit into the round indents around the edges of the wheel. If the wheel was in a certain position this rod would hold the wheel in place so that it could not spin.

As well as the wheel instrument, this device came to UTSIC with a wooden box of glass slides. The box currently holds 38 slides and has 2 empty slots, for a capacity of 40 glass slides. This set should be catalogued as 2014.ep.7.2.

A plate is screwed onto the metal cylindrical piece that attaches the wheel to the vertical stand. This plate indicates manufacturing and patent information for the ball bearing encased in this piece:
“STEPHENS-ADAMSON MFG
AURORA, ILL
SEALMASTER
PAT2,403.687 OTHERS PEND
SHAFT 1/2“ BALL BRG. SFT UNIT 8″

This instrument was used for measuring vernier acuity. The subject sits at a set distance from the wheel and views one of the glass plates at a time. The presentation of the glass slides is controlled by the wheel rotating and presenting the subject with one plate at a time based on a predetermined presentation formula. Each glass plate has a set of lines on it. The subject’s task is to say whether or not the lines on various slides are offset or exactly lined up. This test is analogous to what would be done by someone reading a vernier scale. The analysis of the data resulting from this test is done using standard techniques of psychophysics.

The information about the function of this instrument was provided by Professor Paul Milgram at Engineering Psychology in the University of Toronto’s Faculty of Applied Science and Engineering.

Overall, the instrument is in fair condition, but not in an operable state.

Two of the pieces of paper which are taped partially over the rectangular holes in the wheel are torn.

The plastic outer layer on the wire which connects the control box to the two-pronged plug is cracked and worn off at numerous points along the wire.

One of the prongs on the three-pronged extension cord plug is bent.

There is evidence of a missing part on the vertical rectangular aluminum piece that is attached to and directly above the large white rectangular plastic piece. Where the plastic is attached to the metal by two screws, there is an additional empty screw hole, as well as scratches on the aluminium in a half circle pattern, suggesting that another part of the instrument scraped against this spot numerous times.

Dust has settled on most surface areas of the instrument.

The object should be cleaned off to remove dust. The 3 wires should be untangled and moved out of their current location, which is through one of the rectangular holes in the wheel, so that the wheel can be turned if desired.
There are many layers of tape and sticky notes on the wheel, which could be removed if desired. Most of these items are attached to the side of the wheel opposite the vertical stand and control box.

It is necessary that two individuals cooperate to pick up or move the instrument because of its size and weight.
No attempt should be made to operate the instrument without repairing the wires and consulting an electrician or other individual knowledgeable in electrical safety.

Unknown. It is likely that the instrument was custom made for Professor Patrick J. Foley.

The original owner of this instrument was Professor Patrick J. Foley, who joined the University of Toronto’s Department of Industrial Engineering in 1966.

Information about the function and origin of this instrument was provided in correspondence with Professor Paul Milgram in February, 2014. Professor Milgram works in Engineering Psychology in the University of Toronto’s Faculty of Applied Science and Engineering.

A search has been conducted in the University of Toronto’s library catalogue, but no works written by Professor Patrick J. Foley have been found that pertain to this instrument.