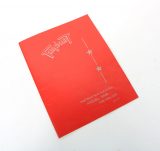 This item is contained in a grey plastic suitcase-like box, with a plastic handle and two metal latches that can be opened by depressing sprung metal strips that merge from the side of the latches. The hinges of the suitcase are detachable so the lid of the box can be entirely removed. The corners of the suitcase are covered with reinforcing metal.

The instrument consists of a control panel built into the bottom of the suitcase. Along the top of the panel are plugs of different designs for tubes with different arrangements and pins of various sizes. In the centre of this, there is a window set in a raised box with a number of scales behind it, and a single indicating needle. Next to this, there are two dials with large metal surrounds and graduations around the rim, a red dome covering a lamp and a small freely rotating knob.

Beneath all of these, there is a row of nine identical knobs, black plastic, with a built-in indicating pointer and a white line painted on to indicate the direction of the knobs. Each of these has an identical scale printed on the panel around it. These dials and scales are numbered one through nine and labelled with the word “Elements”.

Beneath this, there are four additional knobs, a red dome for an indicator light with an on/off toggle switch next to it, two large toggle switches and a small depressable button switch on a rod. Beneath this, and visible behind three rectangular windows set into the panel surface are some printed informational scrolls. These can be scrolled up and down to reveal new information by means of a ridged dial on the right-hand side. All three windows have a red line through the centre to identify and compare information across the windows. On the other side of this at the edges of the panel, there are two small metal rods affixed like small handles. Near this, on the right-hand side of the panel emerges a power cable with a standard three-prong plug on the end.

Also in the box is a red instruction manual called “Triplett Instruction Manual Model 3444”. In this, page 13 contains some handwritten data from the testing of tubes. Tucked inside there is a smaller pamphlet called “3444 Triplett Roll Chart Supplement.”

Engraved on the latches: “RELCO”

On a sticker affixed underneath the scale on the panel: “UNIVERSITY OF TORONTO
ASTRONOMY
DAVID DUNLAP OBSERVATORY”

On the scale:
“TRIPLETT
MODEL 3444
‘PATENT APPLIED FOR’
MADE BY THE TRIPLETT ELECTRICAL INST. CO. BLUFFTON, OHIO, U.S.A.”

The testing and analysis of vacuum tubes.

Excellent: The exterior of the box is in very good condition, with only a few small indentations and marks on the edges and corners of the surface. The metal corners of the box are in places are dotted with residue and the latch fittings and locks have dots of rust on their surfaces. The booklet is in excellent condition. The surface of the panel is dirty in places, particularly around the scroll wheel that rotates the paper scrolls. Knobs and other components are in excellent condition with little sign of wear.

This artifact was kept at the David Dunlap Observatory until 2009. Upon the sale of the Observatory in that year, it was moved to the University of Toronto’s Department of Astronomy & Astrophysics at the St George Campus. In 2017 it was moved to a new storage location in McLennan Physical Laboratories.

Technical information about the Tube Analyser 3444 can be found here at www.indianaradios.com.