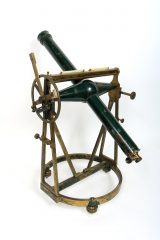 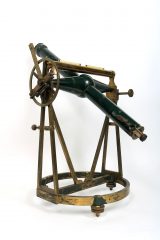 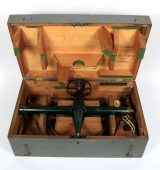 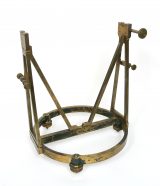 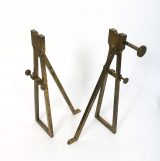 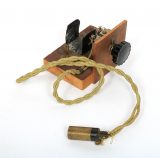 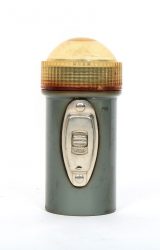 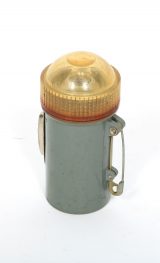 This object is contained inside a large wooden box, painted grey, which has a green moving label stuck to the top, partially peeled off. It has metal carrying handles at either end and a pair of hook latches at the front. There is a keyhole in the front of the box. The instrument is supported inside the box by wooden fixtures with green felt cushioning affixed where wooden pieces meet instrument parts. Instructions handwritten on the inside of the box tell users how to replace components.

The instrument is complete and consists of five major components. There is a large circular metal (brass) base, with three supporting feet, each of which is adjustable with a screw and can be clamped by a nut. Each foot has a pointed base. Two posts consisting of a V-shaped stand and a third perpendicular ‘leg’ for support sit atop the circular base. These have V-shaped openings at the top to support the telescope. The angle of one of these V-shaped openings can be adjusted turning a screw knob.

The telescope, which is painted forest green, rests in the V-shaped openings, resting on narrow cylindrical sections just inside the setting circle and at the other end of the tapered rod that tapers from a broader central section to the narrow support sections. Perpendicular to this rod is the telescope tube. This is 56cm long, with a lens diameter of 4cm, which is covered by a rotating cap that has a rotating cover with a 2.2cm opening.

The setting circle is at one end of the tapered central support of the telescope. It consists of a circle made of metal with six spokes. Around the rim of this, there is a scale divided into four sets of 90 degrees. Fitted on top of this, there is a vernier arm with scales at each end that rest next to the circular scale, and a third longer arm perpendicular to that which extends beyond the edge of the circle and ends in a slightly thicker portion. Also affixed to this, there is a small bubble level. The instrument maker’s name appears on the vernier arm.

Also in the box is a large bubble level on a brass rod cut with two V-shaped slots; this appears to fit over the top of the rod that supports the telescope. In a row of seven wooden slots at the back of the instrument box, there are six bolts for assembling the instruments; one slot is empty. There is a small plastic flashlight attached to a large safety pin clip. Finally, there is an electrical connector, apparently locally made, with a textile cable and a knurled knob switch. Laid on top of the instrument there is a piece of paper containing a typed description of the instrument written by Donald A. MacRae dated December 1980.

Handwritten inside the lid of the box: “ALT. CIRCLE
TO HINGE
TAIL LEVEL”

A transit telescope enables the precise measurement of the position of celestial objects, such as star positions.

Very Good: Box and instrument show considerable evidence of wear and use. The box has many scratches and dents where the paint has been chipped off. Inside the box, there are signs of wear where the instrument has been removed and replaced in the form of marks in the wood.

The instrument is in good condition, with all its lenses and parts intact, but the brass surfaces are dulled and corroded. The paint on the telescope tube and support is chipping off in various places, particularly on the lens cap. Where the paint is missing, the metal underneath is rusty or corroded.

There appears to be one bolt missing. The flashlight is not original to the instrument.

This object was likely used at the Department of Astronomy either for demonstration or research. At some point, it was moved to the David Dunlap Observatory. Following the Observatory’s sale in 2009, it was moved to storage at the Department of Astronomy & Astrophysics at the St George Campus of the University of Toronto. In 2017, it was removed to a new space in McLennan Physical Laboratories.

The document in the box is visible here. It is titled, “Description of Troughton & Simms Transit At David Dunlap Observatory” and was written by Donald A. MacRae, and dated December 1980. MacRae was Chair of the Department of Astronomy 1965-1978, and retired in 1982.