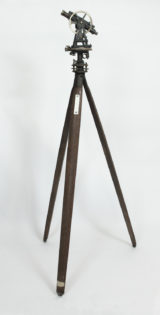 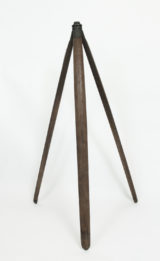 This tripod consists of three wooden legs connected by hinged brackets at the top. These have been cut in order to fit together to form a cylindrical body. Originally, each leg had a metal section affixed to the inside of the leg; this has a sharp based that can be pushed into the ground (one of these is now missing). At the top of the tripod there is a circular section with a screw around its outside for attaching a transit instrument.

There is a paper label pinned to one of the legs.

Typed on a piece of paper pinned to one leg: “Tripod for Carl Reinhardt’s Transit.”

This tripod supports a transit, an instrument used for measuring heights and distances of distant objects, when being used in the field.

Good: The tripod’s wooden legs are in good condition with a few scratches and dents, but no serious damage. At the base of one of the legs, there is the remnants of a paper sticker that has been torn off. The metal of the top support section is oxidized over its surface and subsequently dulled, but is in good condition and not seriously corroded.

This transit tripod was owned by, used by, and bequeathed to the University of Toronto by mining engineer and prospector Carl Reinhardt (1876-1962), along with a transit. Following the donation, the transit was kept at at the Department of Astronomy & Astrophysics at U of T’s St George Campus or at the David Dunlap Observatory. If the latter, it was moved in 2009 to the Department of Astronomy & Astrophysics following the sale of the Observatory. In 2017 it was moved to a new storage location in McLennan Physical Laboratories.

This transit was owned by, used by, and bequeathed to the University of Toronto by mining engineer and prospector Carl Reinhardt (1876-1962). Reinhardt had an interest in astronomy and was a member of the Royal Astronomical Society of Canada (R.A.S.C.).