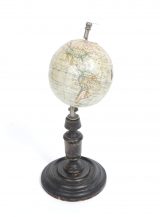 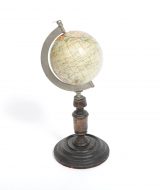 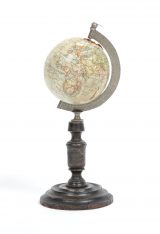 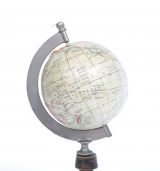 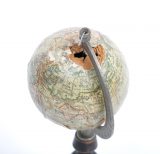 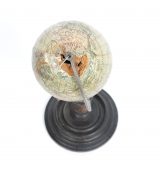 This is a very small Earth globe on a wooden stand with a round wooden base. The wooden stand is small has a circular bottom with circular carved decoration, with a lathed wooden rod fitted to its centre. Slotted into the top of this there is a metal support with a semi-circular metal arc with a raised scale graduated in degrees on it. This metal meridian curves around the globe and supports it at the top and bottom by a thin wire that runs through the centre of the globe from pole to pole. At the top, the wire pokes through the top of the metal meridian and is bent at right angles to hold it in place. The globe is supported at a slight inclination.

The globe is covered with strips of paper fitted together to form a coloured map of the Earth. Some countries, cities and other features such as seas and oceans are shown; countries are outlined in various different colours. Some features such as the Tropic of Cancer and the Equator are shown.

This globe was likely produced for teaching or display.

Poor: The wooden base of the globe has split in three places, with each split being about a centimeter long. The surface of the stand is marked in places with scratches. The metal axis that that runs through the globe appears to be a relatively modern repair or modification. The metal of the meridian scale is somewhat marked and dented, and also slightly warped.

The globe itself is in poor condition. Many of the seams at the edges of the applied paper are torn and peeling, and there are other torn places in the map where the paper has been split or the surface come off. There is a small dent on the globe where “RUSSIA” is marked. The top and base of the globe where the axis enters at the poles of the map is very badly damaged; the map is torn away and the layers of paper that form the interior of the globe are visible. There is a large opening at both ends where the paper has been torn.

This globe was likely purchased by the Department of Physics or the Department of Astronomy & Astrophysics at the University of Toronto for teaching. In the 2000s, it was found in a room in the McLennan Physical Laboratories building on the U of T St George campus, and moved to the Astronomy Library for storage and display.