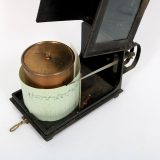 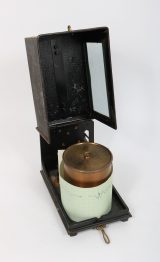 This artifact is contained inside a metal box with a metal loop handle on the top, a simple latch at one end, and a mechanism protected by a metal catch on the other end. There is a rectangular glass window on the front. Releasing the latch allows the top of the box to be opened on hinges along one top edge. Revealed underneath is a metal cylinder mounted with a knob in the centre of the top. The circular top of the cylinder lifts off to reveal a clockwork key and another knob in the centre. Next to this, there is an open hole with a small cover that can be rotated to close the hole. The open setting is marked as “F” and the closed as “S”.

There is a grid paper wrapped around the curved surface of the cylinder. There is an ink line marked around this, by a tapering metal arm with a pen nib at one end. This arm is connected by a series of rods to the mechanism mounted outside the case on one end. This consists of a metal strip wound into a spiral.

Inside the case and next to the cylinder there is a small glass container filled with ink, dried. This has a rubber stopper in the top. The bottle is held upright by fitting into a metal cylindrical stand. There is also an upright rod on a pivoting arm that can be moved to put the pen against the paper, or remove it.

On a metal label affixed over the window: “NEGRETTI & ZAMBRA
LONDON
TRADE MARK”

On a metal label affixed to the base of the interior of the instrument: “Made for
INSTRUMENTS LTD.
OTTAWA & TORONTO”

On the cage protecting the exterior mechanism: “R/4927”

Engraved next to the clockwork key: “7D”

This item records temperature over time. The bimetallic strip, wound into a spiral, expands and contracts with temperature changes. This moves the attached arm which draws on the paper attached to the clockwork-run rotating cylinder.

Fair: The instrument is extremely dusty. The metal surface is quite corroded, particularly around edges, and where the black paint surface has been scratched or worn off. The paint is peeling on the interior of the lid. The mechanism on the side is very dusty and rusted. The condition of the brass-coloured cylinder is much better with little signs of corrosion, but the clockwork no longer appears to run.

This box was kept at the David Dunlap Observatory until 2009. Upon the sale of the Observatory, it was moved to the University of Toronto’s Department of Astronomy & Astrophysics at the St George Campus. In 2017 it was moved to a new storage location in McLennan Physical Laboratories.