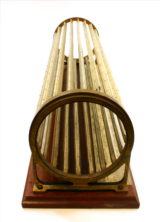 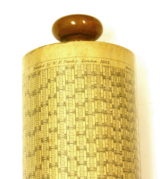 The Thacher’s Calculating Instrument is a cylindrical slide rule which was patented by Edwin Thacher, C.E. on the first of November, 1881. The given instrument consists of a mahogany base with two metal posts at its ends, used to mount the cylindrical scale and the metal rings which provide framework for the axial segments. The slide (A scale) consists of two folded and graduated logarithmic scales; each scale from 100 to 1000 is divided into forty parts of equal length. Thus, the number of exposed sides of the bars equals the number of parts of the logarithmic scale on the slide. The bars have upper and lower lines; the lower lines are each, one of the forty parts of the logarithmic scale and are in contact with the slide underneath. The upper lines feature an extended scale of square roots. This instrument is packaged in a fitting mahogany box with latches.

“Directions for rules and operating” followed by directions for multiplications, division, proportions, powers, squares, square roots, cube roots, how to multiply three numbers together at once (“by one operation”), fractions, simple interest.

On the sticker inside the box: Full addresses for Keuffel & Esser Co.

Item is in very good condition, although the mahogany case that holds it has a substantial crack through one side.

From the personal collection of L. E. Jones.

The 4012 series of Thacher’s Calculating Instruments were produced by Keuffel and Esser Co. New York between the years 1901 and 1927 (2). These instruments were extremely expensive and with a precision of four to five significant figures, a considerable achievement in the early twentieth century. The catalogue price for this model ranged from $35.00 to $70.00, which increased up to $130 in later models for this instrument (4,5,6).