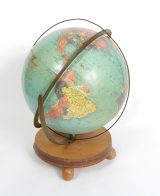 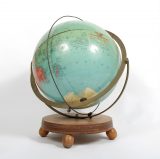 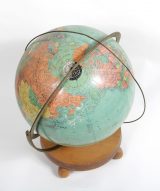 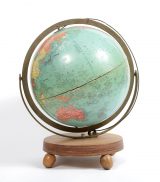 This is a terrestrial globe with colourful countries standing on a wooden stand. The wooden stand consists of a circular disk with a broader base than top supported by four rounded feet affixed to its base. The globe is supported by a semi-circular metal ring that is connected to the centre of this base, and in turn supports a ring that goes around the full circumference of the globe (a meridian) and is connected to it at the north and south poles. These connections allow the globe to be rotated on its axis.

The meridian ring is metal, with a molded scale graduated in degrees on its interior edge around the entirety of the ring. The graduations are labelled in tens in four quarter-circles from 0 to 90. An additional ring, formed of thick wire is loose around the globe. This appears to have originally been connected to the meridian ring via a pair of metal brackets that slot over the edge of the meridian ring; however, both these brackets are loose from the bracket.

The surface of the globe is formed by strips of paper tapered to points at the top and bottom, that are fitted together to form the map (gores). These are colourful, with blue water and countries shown in pink, green, yellow and mauve. Oceans, continents, countries, islands, and major cities are labelled. A grid of longitude and latitude lines is marked in blue. The equator is marked as a graduated line. Some blue lines indicate apparent important shipping routes; these are marked with decimal numbers.

At the north pole, slightly curved so it matches the arc of the sphere, there is a circular metal plate graduated into 24 sections and labelled with the numbers 1-12 repeated twice around its rim, and “HIGH NOON” and “MIDNIGHT”. Half of this is black, the other half silver, with stripy sections indicating dusk and dawn. This can be rotated.

There is a legend in a cartouche on one side of the globe (in the Pacific Ocean). This gives indications for landscape markings, city size markings and scales.

Printed in a cartouche on the globe: “REPLOGLE 12 INCH REFERENCE GLOBE
LEGEND”
“Copyright by REPLOGLE GLOBES, Inc. Chicago, Ill.
MADE IN U.S.A.
Designed and edited by Gustav Brueckmann, Cartographer”

This globe was likely produced and used for teaching, reference or display.

Fair: The wooden base of the globe is in good condition, with a few superficial marks. The surfaces of the metal components are dulled, but not rusty. The wire ring has become separated from the meridian and is loose. The top of this, close to where the ring of metal is joined is very slightly rusty on the surface.

The surface of the globe is cracked in a webbed pattern over much of its surface; the varnish coating is yellowed significantly, especially on the upper hemisphere of the globe. There are small marks and scratches in places across the globe; a significant diagonal scratch in the Indian Ocean is about 8cm long; this has removed the varnish and is indented, revealing the original blue of the water colour underneath. There is a significant split around the equator of the globe running around about a third of the globe’s circumference between Borneo and the South Pacific; this is about 2mm wide at its broadest point.

This globe was likely purchased for teaching or display by the Department of Physics or the Department of Astronomy & Astrophysics at the University of Toronto. In the 2000s, it was found in a room in the McLennan Physical Laboratories building on the U of T St George campus, and moved to the Astronomy Library for storage and display.

Replogle Globes Inc. was founded in 1930 by Luther Replogle.