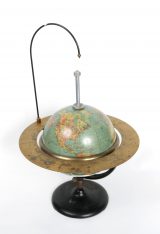 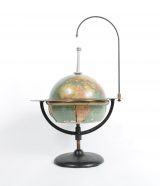 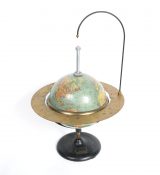 This is heavy a terrestrial globe on a stand that enables it to wobble and tilt in all directions on its axis. The stand is metal, with a simple round base, painted black and a vertical rod rising from the centre. This supports the globe and a semi-circular bracket that curves around and supports a broad ring around the circumference of the globe at the equator (the horizon band). This is divided into broad sections, but not graduated or marked with a scale.

The globe is a standard hemisphere on its top half; however, the bottom is cut off towards the base (eliminating the tip of South America and half of New Zealand), and open. This allows the supporting rod to enter the base of the globe and support it at the rough centre of the globe, and enables the globe to be tilted in all directions. When tilted, the globe swings back to a vertical position.

Rising from the centre of the top of the globe there is a metal rod with a series of ridged rings at the top end, which then narrows to a point. Affixed to the horizon band and rising first vertically and then in an arc is a metal rod that ends in a brass-coloured point that points directly down at the point rising from the globe.

The surface of the globe is formed out of strips of paper which narrow to a point towards the poles of the globe (gores) affixed to a cardboard surface. Around the equator there is a thick metal ring that aligns with the horizon band. The globe depicts the Earth, with countries outlined in colour and water shown in blue. Continents, regions, countries, oceans, major cities, rivers and railway lines are shown and/or labelled. Latitude and longitude lines are shown, as is the ecliptic; this is graduated in small sections, and labelled with “10”, “20” and “30” which repeat around the circumference of the globe.

On a metal label affixed to the base: “MADE BY
EASTERN SCIENCE
SUPPLY COMPANY
P.O. BOX 1414
BOSTON MASS., U.S.A.”

On a metal label affixed just below this: “PATENT APPLIED FOR”

Written in grey paint or ink on the base: “G17”

Fair: The paint on the metal base of the stand is cracked in a crazy-paving pattern, but largely intact. In a few places, chips of paint have come off, and the metal underneath is rusty. The semi-circular bracket and support rod are in in good condition. The horizon band is scratched and worn on its surface, and has patches of corrosion across it. The ring around the equator of the globe is also scratched; where the surface has been removed, the metal is slightly corroded.

The top hemisphere of the globe is in good condition, with a few small tears and scratches where the top coloured surface of the globe has come off. There are a few other marks, including a black smudge just above the equator and off the coast of Mexico. There is a split in the map surface running vertically from the equator about two thirds of the way up to the north pole, just off the coast of Japan; the edges of this are worn.