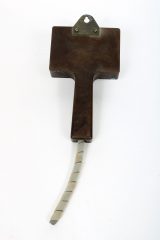 This object is a small hand-held control panel. It consists of a rectangular face with eight yellow buttons, four of which have convex tops (on the left), four convex tops (on the right). These are described by labels in white writing. Attached to the face there is a handle, out of the bottom of the handle there is a thick cable that has been cut off after 15cm; inside the grey plastic coating (and additional translucent coiled coating around this), nine wires in different coloured insulation are visible.

Handwritten in pen on the paper label attached to the cable: “Original handset of the 74-inch”

This handset was the original interface used to control the 74″ telescope at the David Dunlap Observatory. It could be used to set the right ascension and declination of the telescope.

This handset was used to control the telescope at the observatory from its opening. At some point, it was replaced and stored at the observatory. This object was likely moved from the David Dunlap Observatory in Richmond Hill in 2008, upon its sale. It was stored at the Department of Astronomy and Astrophysics until 2017, when it was moved to a new storage location in McLennan Physical Laboratories.