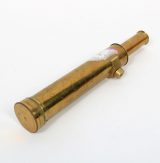 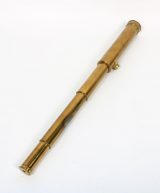 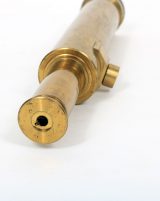 This is a refracting telescope with a brass-coloured exterior. It is cylindrical along its length, with four extendable sections, each one broader than the last. When fully extended it is quite long. The objective lens, 4cm in diameter, is covered with a brass cap with a notch cut out of it to allow it to fit over the lens. The eyepiece has a small lens recessed slightly behind a round brass plate with a hole cut in the centre. This has a small rotating cover that can be slid aside via a small rod.

On one side of the broadest section of the tube, there is an angled section to which there is an attached cylindrical piece for attachment to a tripod. Just above this there is a moving sticker attached to the tube.

Written in black ink on the bottom of the tube: “10”

Good: The surface of the instrument is considerably scratched, particularly on the largest tube, but there are a number of striations along the length of the tube from extending the instrument. The second smallest tube has a rectangular patch where the brass-coloured surface is worn or absent and the underneath is silver-coloured. There is some discolouration around this patch. A moving sticker has been stuck directly to the object and partly peeled away leaving a paper/blue residue and part of the sticker.