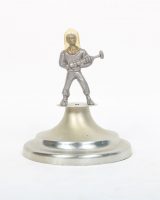 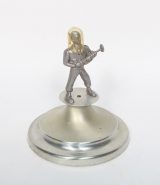 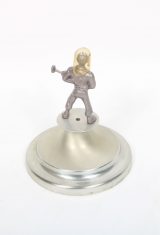 This is a home-made award statuette. It consists of a small, silver, plastic male figure standing with feet apart, and holding some kind of weapon or apparatus. The figure stands at the centre of a circular metal base. The figure has a clear plastic tube over his head as a helmet. A paper label in a plastic slip accompanies the figure.

Label with the object reads: “Although there is no such category, the staff of the Department of Astronomy presented Dad with this statuette for his work in Canada’s National Film Board production Universe (1960, Roman Kroitor & Colin Low, Directors).

Described as a triumph of film art and an awesome picture of the universe as it would appear to a voyager on an outward journey through space, the seminal special effects in this film were an inspiration to Stanley Kubrick in 2001: A Space Odyssey, as well as Star Wars creator George Lucas.

Universe did not prevail at the 1961 Oscars, but the film did win Best Animated Film that year at the British Academy of Film and Television Arts and Film of the Year at the Canadian Film Awards (now the Genie Awards), and our leading actor remains first in our hearts.”

This statuette was constructed by Department of Astronomy personnel and ‘awarded’ to Dr. Donald MacRae, an astronomer at the David Dunlap Observatory in Richmond Hill for his work in the award-winning 1960 film, Universe. The label was written by one of his three sons.

Good: The metal surface of the base of the statuette is dusty and dulled. The plastic figure is in very good condition. The helmet of the figure is somewhat yellowed.