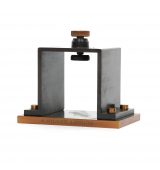 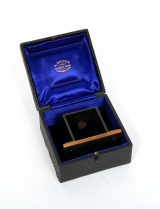 This object is contained in a roughly square box covered in a black leather-effect surface. It is opened by depressing a small knob latch at the front of the box. The interior of the box is lined in blue satin, with the name of the instrument maker in gold insider the lid.

The instrument is made of brass. It consists of a flat metal base with a rectangular attachment fitted by four screws. This sits on top of the base to create a boxlike opening, with a knob on the top which can be screwed in and out to raise and lower a knob in the interior of the opening. Diagonal marks on the base of the opening indicate a component has been held in place here.

On the interior of the lid of the box: “A. HILGER
75a
CAMDEN ROAD
LONDON N.W.”

Engraved on the base of the instrument: “A. HILGER, LONDON”

Engraved on the top of the instrument, next to an arrow indicating direction: “TELESCOPE”

This appears to be supported to hold another component in place, perhaps a spectrographic slit, that would ensure only a narrow slit of light reaches a prism or diffraction grating in a spectroscope.

Very Good: The box shows some wear, particular on the corners and base, where the surface is worn and peeling. The instrument is in good condition with no signs of corrosion or wear. However, it may be missing a component.

This object was likely used at the Department of Astronomy as part of a spectroscope. At some point, it was moved to the David Dunlap Observatory. Following the Observatory’s sale in 2009, it was moved to storage at the Department of Astronomy & Astrophysics at the St George Campus of the University of Toronto. In 2017, it was removed to a new space in McLennan Physical Laboratories.