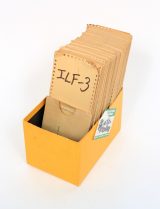 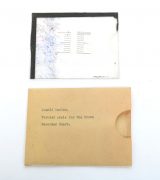 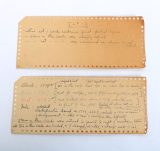 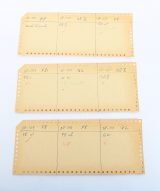 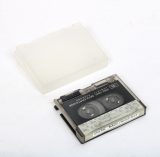 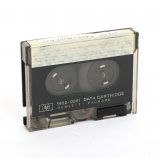 This object comprises a yellow lid-less box containing one glass plate and a large quantity of long rectangular cards with punched rims. These are stacked vertically, standing on their narrow edges. A green moving sticker is stuck to the side of the box.

The plate is rectangular and tucked into a paper envelope. The typed label reads: “Donald MacRae, Vernier scale for the Brown Recorder Chart.” On the plate, there are two paired series of lines forming two scales, one consisting of 11 lines, the other of 12 (where an extra dashed line splits one of the increments in half). The plate has a black paper on two edges only.

Each card has circular holes punched around the majority of its rim, and one cut off the corner. The rear of the cards (the “front” in its original use) contains a printed form. This is headed “SALES ANALYSIS CARD”. Some cards are unused.

The first card reads “ILF-3” in large letters. The second two cards provide information about the content of the remainder of the cards. Each of the data cards is divided into three portions, each with a different heading and a two-part number beginning with either 28, 29, 30 or 31. In each portion there are notes always in pencil, then green, then red. There are occasionally plain English comments.

There is a data cartridge tucked in the back of the box, in a clear plastic case. This has “SPARE BASIC/MULTIPLOT” written on the label.

Typed on the envelope that contains the plate: “Donald MacRae
Vernier scale for the Brown
Recorder Chart”

In pencil on the second card: “ILF-3
This set of cards contains final spectral types
– stars on other cards were simply copied
– ” not ” ” ” were examined as shown on the next card.” [This refers to the information contained on the third card, included in the photographs of the instrument].

Handwritten on data cartridge label: “SPARE BASIC/MULTIPLOT”
Stamped on the back of the cartridge: “LIC U.S. PAT
3 692 255
MADE IN SINGAPORE”

These cards systematically record spectral type measurements from star observations, taken using three methods or types of equipment. It is not clear what stars each set of data refers to.

Good: The cards are generally in very good condition, all their original data is clearly visible. The first three cards are more damaged than the others; they are bent and worn around the rim where the punched holes have weakened the card. All the cards are yellowed with age; this is especially pronounced on the second card.

This dataset was created at the David Dunlap Observatory, possibly by Donald MacCrae. Following the Observatory’s sale in 2009, it was moved to storage at the Department of Astronomy & Astrophysics at the St George Campus of the University of Toronto. In 2017, it was removed to a new space in the Department of Physics.