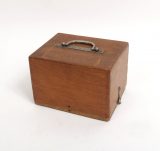 This is an semi-circular instrument sitting on a wooden base, with a wooden cover. The cover has a metal handle on the lid, and a pair of metal hooks on either end. The base is rectangular, with metal loops on either of the narrower ends.

The instrument sits on top of the base can consists of a semi-circular metal frame, oriented vertically, with a space between the two outer edges, creating an internal curved surface facing upwards. Into this there is a rectangular piece of cardboard printed with a warped, curved grid pattern, fitted into the base of the cuve. This is labelled “Standard Time” at the lowest point. Across one long edge of this grid there are Roman numerals from VII to XI, and I to V, with “NORTH” in the middle at the lowest point. On the other side, the Roman numerals appear in the opposite order, with “SOUTH” at the lowest point. On the short ends the months from “July” to “Dec.” are indicated along the wavy line of the edge of the grid edge.

Half way through this, dividing the semi-circular shape into quarter-circles at the lowest point, there are two horizontal rods that cross the grid space at the top. Thes enarrow to points where they meet, creating a precise point. Suspended below one of these there is a rod with a pointed base that is hinged so it can rotate 90 degrees along a curved bracket fitted into the base of the curve. An unlabeled scale is engraved along the base of this curved bracket.

Printed on the cardboard grid: “Ferguson’s Solar Chronometer”
“Registered No. 576942.”

This instrument permits the telling of time by shadows cast by the sun. The frame and grid can be tilted in order to adjust for different latitudes.

Excellent: The instrument’s lid is in very good condition, with two pale marks on the lid of the box, and some damage to one corner, where the wooden joins are coming apart. There are some grey (pencil?) marks inside the case.

The instrument is in excellent condition, with a few marks on the wooden base; there is a slightly darker patch on the wood next to the plate reading “Ferguson’s Solar” where a marker’s label was previously attached (missing). The metal components are on the whole in excellent condition; however the section with engraved scale underneath the indicating rod is oxidized.

This may have been purchased for demonstration or display by a faculty member at the Department of Astronomy & Astrophysics at the University of Toronto.

Other examples of this instrument can be viewed among the digital collections at the Royal Museums Greenwich, London rmg.co.uk, and the Science Museum, London. sciencemuseumgroup.org.uk. [17/10/19]. Both are identical to this instrument and are listed as having been made by J. H. Steward.