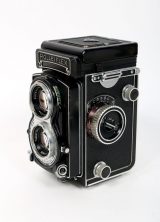 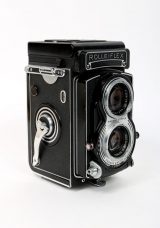 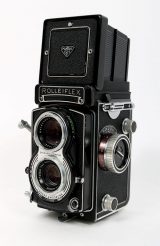 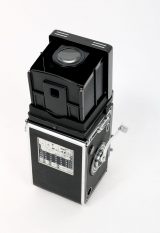 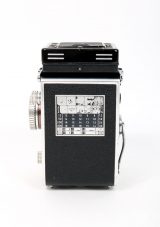 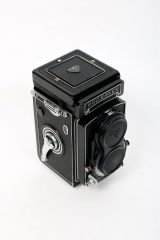 This is a box-shaped Rolleiflex camera. On the front of the camera there are a pair of lenses, one on top of the other in a figure ‘8’ arrangement, with a friction-fit plastic lens cover. The lower lens is lightly smaller than the upper lens. On the top of the upper lens there are two openings which reveal a pair of numerical indicators, one labeled ‘f’, the other ‘t’. Various other small knobs and dials surround the lenses. On the base of the camera there is a rotating latch; this appears to losen the back of the camera. Also on the base there is a central screw hole for attachement to a tripod or stand.

On the rear of the camera there is a chart wiht information about various settings for the camera, indicating with images of various locations (e.g. skiing, interior scene) and numbers indicating settings.

Embossed above the lenses: “ROLLEIFLEX”

On the focusing dial: “GERMANY”

This is a hand-held camera used to take images on photographic film.

Very Good: This camera is in very good condition, with few signs of wear. The numbers around the rim of the focusing dial are worn away and there are some small other marks on elements of the camera subject to rubbing or scraping (protruding pieces and corners/edges).

The dates and serial numbers of the Model K8 T3 are identified at rolleiclub.com.