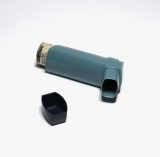 A blue plastic object with a darker blue cap. The artefact is vague L-shaped and has a pressurized metal canister with a 15ml capacity protruding from the top.

The pressurized metered dose Inhaler (pMDI) delivers a calibrated dose of medicine into the respiratory tract. This item contains salbutamol (Ventolin) which is a bronchodilator used to treat asthma and other medical conditions.

Very good: The artefact lacks its original packaging, but is in generally good condition. The medicine/ propellant canister appears empty.

This item was acquired along with a collection of medical artefacts from the home of Dr. Stanley Epstein on February 19, 2019.

In an informal interview carried out on February 19, 2019, Dr. Epstein referred to this artefact as “The classic…” “…that turned out to be so important”

The concept of the MDI has been credited to Dr. George Maison, President of Riker Laboratories, Inc. Dr. Maison’s nine-year-old the daughter had asthma, and sometimes dropped and broke her glass nebulizer, an instrument that was then commonly used to administer adrenergic bronchodilator. Around 1954-1955, she is said to have remarked: “why not make an inhaler like the hair sprays?”
In April of 1955, Dr. Maison, along with Mr. Irving Poresh invented an instrument that incorporated an existing patented metering valve. This was approved by the FDA in March of 1956. The Medihaler-EPI and Medihaler-ISO were subsequently into the medical marketplace.
MDI’s grew in popularity over the 1960s. In the late 1970s, the use of chlorofluorocarbons (CFCs) was banned in the United States. This coincided with the development of power-based inhalers. Non-CFC propellants have since been developed and popularized. [Epstein and Duncan, 1984]