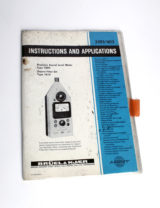 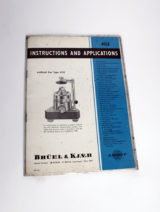 Instrument: The instrument has rectangular-shaped, pale-green, painted-metal body. The head of the instrument is cone-shaped, with a round-metal output for attaching a microphone. The interface of the instrument has a large, clear plastic and black painted-metal rotary knob, ranging from 10dB to 130dB. Below the knob is a glass meter dial, containing a measurement scale and a measurement needle. Below the dial is a medium-sized black painted-metal knob. Adjacent to the right side of the knob is a silver, metal input and output for an amplifier. Adjacent to the left side of the knob is another set of silver, metal input and output for a Octave Filter, which is attached below the body of the device. The body of the device is heavy and includes leather strap for carrying. ***The instrument is designed to be battery-powered, but it is unknown whether batteries are currently contained inside the device.

Several of the objects contained in the case feature a maker’s mark and serial number:

The original manual states that the device’s most common use is “mainly intended for the quick and accurate measurement of noise from traffic, and within factories and buildings as the instrument gives a direct scale reading in decibels” [Christensen, 2010]. The Artificial Ear attachment can be used for measuring sound in a similar way to the human ear, giving an objective, reproducible indication of sound level.

The apparatus is good condition. The outer latch on the device’s case is broken. As a result, the case should not be picked by its handle and handled carefully to prevent its contents from falling out. The metal edging on the case displays signs of oxidization. The foam lining protecting objects inside the case has begun to flake significantly. The Precision Sound Level Meter is in excellent condition, with very few signs of cosmetic wear. The wooden box containing the Condenser Microphone Cartridge Type 4144 has a broken latch which has been repaired with masking tape. Artificial Ear is missing a rubber stopper on its base. The Microphone Windscreen is missing from the case, but may be misplaced with other objects in UTSIC’s collection.

Purchased for the University of Toronto between 1970 and 1980 by Professor Patrick J. Foley.

Acquired from Professor Paul Milgram of the University of Toronto Engineering Psychology Department in October 2012.

The Brüel & Kjær Precision Sound Level Meter 2203 was the world’s first precision hand-held meter. This type was produced for twenty-one years, selling over 17,300 units [Christensen, 2010]. Unlike previous models, the 2203 could be operated by one person as the configuration of attaching a stable, free-standing, microphone to the device allowed sound to be measured without the need of an assistant to hold the microphone.

At the University of Toronto, the device was likely used by Professor Patrick J. Foley to demonstrate measurement techniques in Human Factors classes [Milgram, 2014]