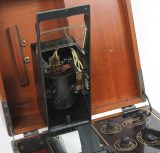 A cube-like wooden housing with a hinged lid secured with a latch. A gold-coloured plate on the upper portion of the front face has information about the maker and purchaser embossed in black lettering. A plastic handle is attached to the top centre of the lid. Two sockets are located in a black-coloured recess at the centre of the right-side face.

An electrocardiograph (ECG) produces a graph of the electrical signals of the heart. It is used to diagnose heart illnesses.

Very good: The finish on the outer wooden surface is damaged and delaminating. There is superficial corrosion on various metal surfaces. The plastic material of the dials and switches is slightly corroded.

This instrument was donated to the IHPST by Dr. Brian Sevitt, a Toronto cardiologist, on June 14, 2019.

Dr. Sevitt acquired this artifact when he was a chief resident at Mount Sinai hospital in 1976. He was then part of a team working on the first closed-loop artificial pancreas. It was given to him by Dr. Bernard Leibel (1914-1995), a biomedical engineer who headed the team when he decided to leave the project to enter private practice.

A brief account of this research may be found here: