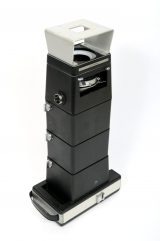 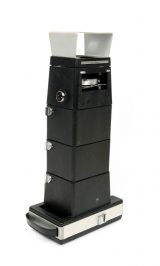 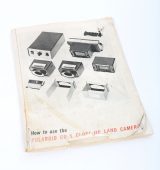 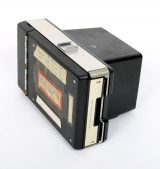 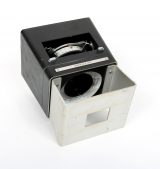 Fixed to the front of the camera there is a tapering plastic box with a large shutter opening on the front. This shutter can be opened and closed by way of a rotating dial reading “LOCK” and “OPEN”, which also operates the latches that hold this portion of the camera to either other ratio multiplier boxes, or the lens assembly.

The final box is attached to the camera in the same way, and contains the 3-inch lens (2019.ast.165.2). This box has a square opening on the top, through which the lens is visible and can be adjusted via various protruding handles on the dial. On the base of this box there is a metal latch; pulling this latch mechanically opens the shutter, which can be held open as long as the latch is pulled. On one side of this box there is a four-pronged male plug into which permits the camera shutter to be connected to the CU-5 Power Pack. Around the front rim of the lens there is a plastic ring, which contains a circular flash-bulb.

Affixed to the front of the lens assembly there is a metal bracket, open at the top and the bottom, with a square hole cut at the end; the lens looks through this viewfinder frame.

Next to the film slot: “MAKE SURE BOTH SIDES CLOSE”

On a paper sticker stuck to the back of the camera: “Please sign the list on the refrigerator door when using the Polaroid camera.”

On another paper label: “CLEAN THE ROLLERS EVERY FILM CHANGE”

On the rear rim of the shutter opening: “SHUTTER MADE IN GERMANY
Lens made in Germany”

Polaroid cameras use film which immediately develops an image (within a few minutes). This camera, the CU-5 (“Close Up”), is a fixed-focus camera for taking macro photos. The ratio multipliers can be added to increase the magnification of the images taken.

Very Good: The camera is in excellent condition, with only minor damage. The hinge of the film door is rusty in places, and there are some marks on the metal section of the top of the camera. Four paper labels have been attached to the back of the camera, providing instructions about its use. Two of these have been held on with invisible tape.

The lens is in excellent condition, although slightly scuffed on the exterior surfaces. There is tape residue on the bracket attached to the front of the lens, both above and below the square opening.

The ratio multipliers have scuffed surfaces, but are in excellent condition.

An instructional booklet entitled, “How to use the Polaroid CU-5 Close-Up Land Camera” and two pamphlets discussing Polaroid film are stored in the artifact’s file.