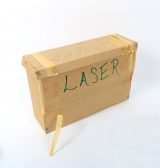 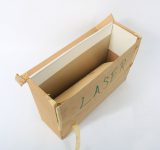 This object consists of a rectangular cardboard box with the word “LASER” written on it; this has been crossed out. There are bits of dried tape hanging off the box. The lid of the box flaps open.

Inside the box, there is a cardboard folder containing files related to student Clarence T. Hay, completing a fourth year of a degree in Astronomy at the University of Toronto, under Donald MacRae, in 1976-1977. The folder includes correspondence, Hay’s student records and student work by Hay over the course of the year 1976-1977. Hay’s work focused on spectral classifications.

Each envelope has the New General Catalogue (NGC) number of the object written on pencil on the outside.

This is the work and completed paper of Astronomy student Clarence Hay, who worked on the “A-star project” under David Dunlap Observatory astronomy professor Donald MacRae, in 1976-1977, for the course AST425H. Some of the spectroscopic slides are dated to 1966, suggested they are perhaps examples or comparisons provided by MacRae.

Very Good: The box, which has been reused at least once, is damaged. The lid and sides have been taped back together. There are dark spots on a strip of tape on the side, perhaps mould. In places, the tape has dried and peeled away, leaving either residue marks or dangling pieces of tape. A sticker stuck to the side of the box is wrinkled. There are other dark marks, suggesting damp.

This artifact was kept at the David Dunlap Observatory until 2009, probably among the possessions of Donal MacRae. Upon the sale of the Observatory in that year, it was moved to the University of Toronto’s Department of Astronomy & Astrophysics at the St George Campus. In 2017 it was moved to a new storage location in McLennan Physical Laboratories.