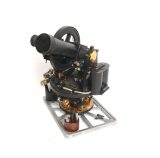 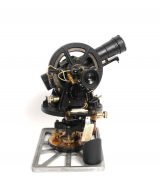 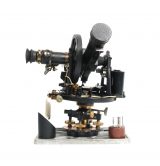 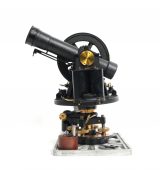 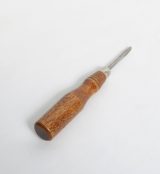 This is a large theodolite inside a wooden box that is painted khaki green. The box is simply made, with a hinged door on one side that can be held shut with two latches. On top of the box there is a metal handle. The box’s corners are reinforced by metal covers. Inside the box, fixed inside the door in a leather pocket with an open bottom, there is a conical plumb bob with a string attached to the top. This is wrapped in brown paper. In another leather pocket on one side of the interior of the box there is a small screwdriver with a wooden handle.

The theodolite stands on a rectangular metal base, supported from a stand in the centre. In one corner of the base, there is a cylindrical piece with a slanted top; inside this, there is a brown circular section. In another corner, there is a wooden cylinder containing three small lightbulbs, two small rods tools stored vertically, and an additional tool that can be accessed by unscrewing the lid of a cylindrical case. The tool is fixed into this lid and has a delicate broad base.

The base of the instrument is circular and made of brass. This supports an adjustable stand with four screw posts supporting the larger circular disk that supports the instruments other components. The disk and components are painted black with a textured surface. The disk base has two roughly triangular supports standing on either side of it, which supports a telescope tube between them on a broad rod, enabling it to be tilted in one dimension. A spoked wheel with a scale around the rim, graduated in degrees, permits the angle of the tilt to be measured. The telescope objective end is covered with a round cover.

At the intersection of the telescope and the support rod, there is a box shape. This connects, through the centre of the spoked wheel to an eyepiece tube with a lens and rubber eyecup at the end. Emerging from the side of this tube there is a second smaller lens. There is a brass knob on the other side of the main tube. A wire runs from the end of the tube around the instrument to a battery case consisting of a pair of vertical cylinders on the other side of the instrument. Beneath the eyepiece tube, there is knob with a central indicator. This has “INCREASE VOLUME” and a directional arrow printed on it.

There are various other knobs, screw and adjustents on the instrument, allowing it to be finely adjusted. In the centre of the disk stand there are a pair of bubble levels set at right angles to one another.

In raised lettering on the metal base: “D.W. CO. MILWAUKEE”

Engraved on the brass circle below the adjustable stand: “31/2-8-THDS.”

On a paper label glued to a metal flag affixed to the side of the instrument: “IMPORTANT
TURN OFF SWITCH
TURN RHEOSTAT MAX.
COUNTERCLOCKWISE WHEN FINISHED”

Engraved on the top of the battery case: “USE 2 BATTERIES
BA-30”

A theodolite is used to measure angles, both horizontal and vertical, in surveying, meteorology, and navigation. The user looks through the device, which is mounted on a tripod, much as one does with a telescope. The purpose of a theodolite is to record accurate angles in order to map precise locations of sites or objects, and create topographical maps. A theodolite can be used to measure the location of a celestial object at a given time.

Very Good: The case of the instrument is in a good condition, and intact, although the paint is damaged and nicked across the surface. The paper wrapping around the plumb bob is torn and yellowed; however, the leather pockets inside the care are in excellent condition.

The metal base of the instrument is discoloured and nicked in places, but in good condition. The surfaaces of the instrument are in very good condition. However, in places, the paint surface has chapped off, particularly around the rim of the disk base, and around the circumference of the eyepices tube where it passes through the centre of the spoked wheel. The silver-coloured scale inside the spoked wheel is badly oxidized and blackened.

The lenses and other components appear to be in very good condition. The textile insulation on the visible wires is discoloured where it connects to metal components, but not frayed.