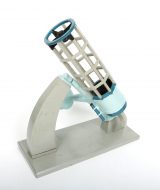 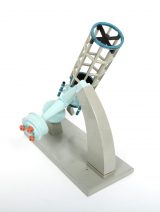 This object is a scale model of the 74-inch reflecting telescope at the David Dunlap Observatory of the University of Toronto at Richmond Hill, Ontario. The model is 1/30th the size of the real telescope. The most notable feature of the object is a scale model of the reflector telescope. This telescope is tube shaped, made of wood and painted grey in colour. The reflector telescope is articulated and rotates on an axis. This model has a handle at the end of the telescope to assist the rotation of the long tube. The mount of the telescope features two spectrographs attached at the Cassegrain focus and the Cassegrain-mounted Echelle. This section of the mount is painted light blue with four screws painted orange. The entire model is attached to a wooden, rectangular base that is also painted a grey colour.

The model was used for teaching purposes and conceptualizing instrumentation by the faculty and students in the Department of Astronomy and Astrophysics at the University of Toronto.

Fair. The wood base, which the model is mounted on, exhibits numerous hairline cracks in the layer of paint covering the entire surface. The paint is also flaking in various spots and there are dirt marks all over the base surface, edge and bottom. There is also a loss of wood along the right edge of the base. Near the mount of the telescope on the left side of the base surface there is a visible circular stain from a tool mark around a screw. The stain measures 1.3cm in diameters. The mount of the telescope is attached to the base however, there is a large rupture almost entirely separating the mount from the base. Screws have been placed inside the mount to fasten the piece to the base. It is unclear if these screws were installed during the objects original construction or added later. Along the front length of the mount there are tool markings where the object was filed/shaved during construction. The paint is flaking in various spots and there are dirt marks scattered over the mount. There is a 2-inch crack in the paint at the top of the side panel of the mount. There are a number of localized areas where the paint has cracked or is flaking all over the tube or reflecting telescope. Additionally, there is a loss along the tube as a piece of wood is missing. Inside the tube there appears to be some sort of infestation as there are insect webs visible down the tube.

Possibly made by the machine shops in the basement of the observatory in the Department of Astronomy and Astrophysics at the University of Toronto or the David Dunlap Observatory..

This object was made at the David Dunlap Observatory in or just before 1953, and moved from there in in 2008, upon the sale of the observatory. It was stored at the Department of Astronomy and Astrophysics on U of T’s St George campus until 2017, when it was moved to a new storage location in McLennan Physical Laboratories.

The object is currently in storage. It may have been previously displayed in the Astronomy and Astrophysics building, room 85 at the University of Toronto.

In 2013, the model was included in an exhibition titled, “Innovators in Instrumentation: Advancing Astronomy at the Dunlap Institute” curated by a group of graduate students from the Museum Studies program at the University of Toronto. This group of students included Samantha Haddon, Lauren Herzog, Emily Horne, Laura Imrie, Claire MacDonald-Matthews and Amanda McGee. “Innovators in Instrumentation” was intended to demonstrate the historical development of astronomical instrumentation over the past century. The exhibition opened to the public on March 22, 2013 on the 3rd floor of Victoria College on the downtown St. George campus at the University of Toronto. Visitors could view the exhibition Monday through Friday, 9am-5pm and admission was free. The exhibition ran until October, 2013.

The Librarian at the Department of Astronomy and Astrophysics at the University of Toronto, Lee Robbins, was contacted and asked if she knew anything about the model or was aware of any records that mentioned the model. Lee Robbins explained that the department does not have good circumstantial provenance for most of the astronomy artifacts. After talking with some of the faculty, Robbins reported that the model for the DDO telescope was probably constructed in the machine shop at the David Dunlap Observatory. She also stated that is it is likely professors from the University of Toronto Department of Astronomy and the David Dunlap Observatory used the model as a teaching tool to demonstrate the telescope function, size of the tub, mount and mirror among other facts. Lee Robbins also mentioned that current faculty remember that John F Heard (appointment term: 1941-1976) used models for teaching. He served as Chair of the Department of Astronomy and DDO Director from 1951-1952 (acting) and 1952-1965.