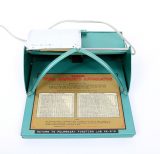 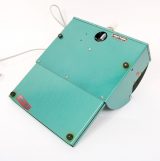 2019.ihpst.99.1: A metal instrument with a teal-coloured coating and a rectangular footprint. A large label, coloured primarily in gold an red, covers much of its lower surface. The stylus assembly is fixed to the lower surface. Above this is positioned a marking surface that slides horizontally against the stylus along a rail. A pressure-sensitive paper chart is clipped to this marking surface.

A power cord protrudes from the right side of the instrument.

2019.ihpst.99.2: A cardboard box containing “Vitalor Charts No. VC-26”. One of these carts, dated April 4, 1972, has been marked by the instrument. The box also contains two cue cards that provide details of the instrument’s operation. These are partially transcribed in the “Historical Notes” field below.

A metal label on the bottom surface reads provides the following information: ” Model V 25″, “Ser. No. 1605”

The paper chart affixed to the instrument contains the following information:
“McKesson Vitalor Chart No. VC-26”

Spirometry is a test to measure vital capacity in order to diagnose airway obstruction. A spirometer is an office instrument to provide a measurement of vital lung capacity.

This volume displacement spirometer provides a recording of a time/ volume curve of a patient’s exhalation.

This instrument was used in the office of Dr. Jack Fitzgerald, a Toronto allergist. It was acquired along with a collection of medical artifacts from the home Dr. Stan Epstein on March 13, 2019.

A cue card found in a box of charts used with this instrument contains the following information:
McKesson Vital
I
– A simple relatively inexpensive ($250) apparatus to determine
1. Vital capacity – volume of air maximally expelled from the lungs after maximal respiration.
2. Fixed vital capacities – volume of air expelled in a given time
1 second & three second
1 sec – 65%
3 sec – 90%
3. Maximum expiratory flow rate. Ability to expel air from the lungs
normal 300-500 l/min

II Uses.
1. provides a record of the pulmonary function of a patient.
– suffering from a chronic or acute condition
– prior to surgery