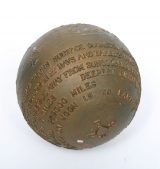 In raised letting on the moon: “©7643”
“MANNINGS MOONBALL ACTUAL RELIEF OF MOONS SURFACE DIAMETER 2160 MILES REASON MAN HAS SEEN ONLY ONE SIDE OF MOON IT ROTATES ON ITS AXIS IN 27 DAYS AND TAKES 27 DAYS TO CIRCLE THE EARTH
SURFACE TEMP ON SIDE WE SEE 212° SIDE AWAY FROM SUN 300° BELOW
ITS 239000 MILES FROM EARTH
HIGHEST MTS OVER 6 MILES
DEEPEST CRATER NEWTON 29000 FT
GREATEST DISTANCE FROM EARTH 252000 MILES
ESCAPE ON MOON 1.5 TO EARTH 7”

Manning’s moonball was intended to be an educational toy.

Very Good: The ball is in good condition, although it is scratched and marked across its surface. In places the bronze surface has been scraped off, revealing, variously, red, blue, white or silver coloured surface underneath.

Frank Manning is described in this online biography, by Patricia B. Mitchell, which includes an interview with Manning by a short-lived (1974-1975) New Orleans magazine, the Community Standard.

Manning’s Moonball was advertised in the January 1967 edition of the “Boy’s Life” magazine (pg 59).

Frank Manning, the designer and copywriter of the Moonball, sued TIme Ltd in the 1960s regarding the Moonball.