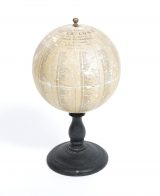 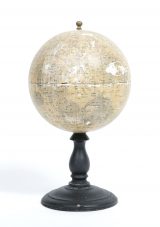 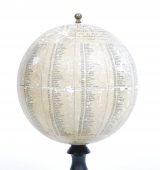 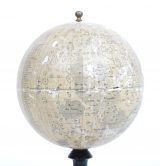 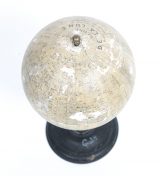 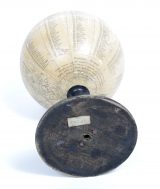 This is a 5 3/4-inch diameter globe depicting the moon, standing on a wooden stand. The wooden stand has a round base and a lathed vertical support. This supports the globe vertically, on a metal rod with a brass knob emerging from the north pole of the globe. The globe is covered with sections of paper fitted together to form an image; these are largely long paper gores that narrow at their ends, but the poles are covered with circular patches (calottes).

One hemisphere of the globe depicts the Earth-facing side of the moon, with a large number of craters and other features such as maria (seas). The maria and other large features are labelled in French; the craters are numbered. On the other hemisphere of the globe there is a key which identifies these craters via these numbers. Beneath this there are listed some facts about the moon.

Written in white paint on the stand’s round base: “G24”

This globe was likely produced for teaching students about the features on the Moon.

The globe is in very poor condition. The paper surface is damaged across much of its surface. In some places the printed surface of the globe has been scratched off; in other places, there are cracks in the paper surface revealing white plaster underneath. There is an especially prominent scratch around the whole of the equator of the globe, and an oval patch of damaged surface on the right hand side of the cratered hemisphere. The paper sections are in places split slightly, revealing plaster underneath. The north pole of the globe is damaged and indented, revealing layers of plaster and paper.

This globe was likely purchased by the Department of Physics or the Department of Astronomy & Astrophysics at the University of Toronto for teaching. In the 2000s, it was found in a room in the McLennan Physical Laboratories building on the U of T St George campus, and moved to the Astronomy Library for storage and display.

Another example of this lunar globe can be found in the Science Museum’s collection. [12/11/19]