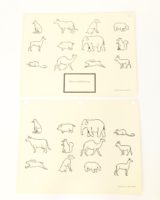 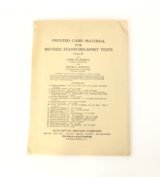 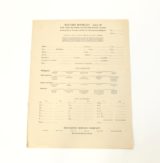 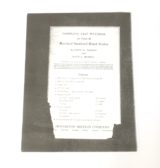 A wooden box containing eight smaller cardboard boxes which contain various objects, forms, and booklets.
Box I-m: three small cardboard boxes, one contains a small cat.
Box II-m: one cardboard box, one wooden orange block, one dog, one stopwatch, one button, and one pair of scissors.
Box III-m: one stove, one American flag, one telephone, one boot, and one jackknife.
BoxIV-m: 12 blue blocks, one box containing black and white buttons.
Box V-m: One black cord, many yellow beads which are spherical, cylindrical, and square shaped.
Box VI-m: 1 egg-beater.
There are two other big boxes.
The first box contains one pink bed, one female doll, one dog, one orange ball, one pair of scissors, and one train with a fixed whistle on the bottom.
The second box has one pair of scissors, one oven, one blue bed, one pipe, one dustbin, and one queen chain.
There is also one green form board in a paper sleeve which contains cutouts of red circle and triangle shapes; one record booklet which contains room for personal information; a questionnaire for a test; One packet of printed card material containing cards with images and vocabulary; one cardboard image of a young boy in a red jacket; one photocopy of other contents of the box.

Label taped to the front which reads “Dept. of Psychology: University of Toronto Binet Form M.”

A few scratches on the box; most pieces inside the box are in good condition. There is an open note in one of the boxes stating that a picture, a vocabulary card, a shoe lace, and some beads are missing.