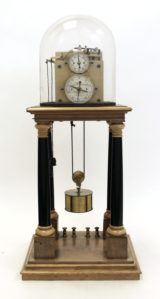 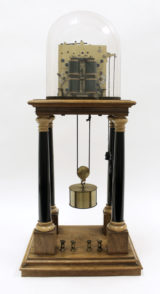 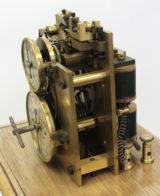 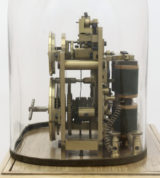 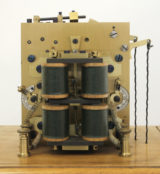 A large brass and glass instrument mounted on four Doric-esque columns that are attached to a wooden base. There are four terminals on the far side of the base between the bases of the two far columns. The instrument is a complex geared clock mechanism and is housed under a glass dome. The clockwork consists of two dials, one for seconds, and 10ths, the other for 100ths and 1000ths. The clock is regulated by vibrating tonguepointers connected to a clutch, which in turn connect to electromagnets at the back of the instrument. A large brass cylindrical weight is suspended below the instrument, between the four columns. A second smaller weight is suspended from two arms that protrude from the left side of the instrument. This weight hangs between the two left columns.

2) Schraven, Thomas. 2003. The Hipp Chronoscope. The Virtual Laboratory: Essays and Resources on the Experimentalization of Life (Max Planck Institute for the History of Science, Berlin): 1-56.

Charles Wheatstone developed the chronoscope in 1842 to determine the velocity of projectiles. In 1848 Mathias Hipp improved Wheatstone’s design, making the movement of the clockwork more uniform. [Edgell and Symer, 1906]