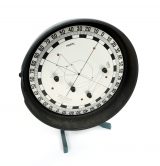 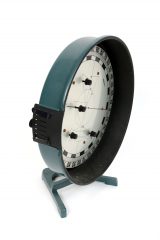 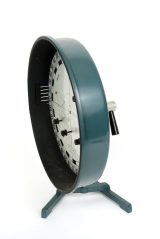 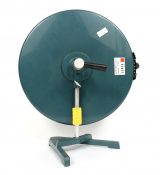 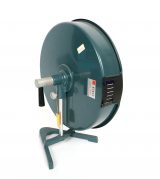 This object consists of a large disk mounted vertically standing on a stand. The whole apparatus can be rotated horizontally around the stand.

Mounted inside the disk there is a metal panel with a rim graduated in 360 degrees, with 0 degrees opposite one another, and 90 degrees opposite each other. The panel can be rotated by means of a handle on the rear of the disk. Inside the disk, there are four knobs, three in a horizontal row and one directly above (when the lettering on the panel is set upright) the rightmost knob; these can be unscrewed and moved to five additional screw holes in the panel. Printed on the panel between these knobs there are various geometric shapes.

In raised lettering on the feet of the stand: “cenco”

On a sticker affixed to the rear of the disc: “CENTRAL SCIENTIFIC DIVISION OF
CENCO INSTRUMENTS CORPORATION
CATALOGUE NO. 85245
cenco”

On a paper sticker affixed to the rear of the disc: “AST50”

The Hartl Optical Disc demonstrates optical effects. It demonstrates the path of a ray of light (shone through the gaps on the rip of the disc) through acrylic prisms and lenses that can be mounted on and between the knobs screwed into the rotating panel. The change in the angle of rays can be measured against the graduations on the rim of the disc.

Good: The disc structure is in good condition, although the screws of the pegs are very rusty. However, all the acrylic lenses and prisms are missing.

This object may have been used for demonstrating optical effects at the Department of Astronomy and Astrophysics. At some point, it may have been moved to the David Dunlap Observatory at some point, if it was not always there. In 2008, with the closure and sale of the observatory, the object was stored at Department of Astronomy and Astrophysics until 2017 when it was moved to a new storage location in McLennan Physical Laboratories.